When it comes to fashion in Eorzea, my obsession has led me to a place where money is never a barrier. A long time crafter (though a less devoted one these days), I have a steady in-game income, and outside of the old Zodiac questline or the new Anima questline, just about all my money goes toward glamour prisms (which I am admittedly too lazy to craft on my own), rare dyes (because my retainers never bring me the good ones), and different pieces of equipment for glamour.

My habit of throwing gil at the market board in order to look pretty hit new heights over the past couple weeks ago while crafting my latest outfit for my healing jobs (of which WHM is my preferred choice). As mentioned in the post on my BRD/MCH glamour, the central piece of this one is the Holy Rainbow Shirt of Healing. Normally, when I use one of those shirts or the other variations of it, I pair it with a pair of shorts of some variety, but I was already using the Lady’s Knickers (White) for my NIN glamour, and I try where possible to avoid using the same piece twice.

I experimented with a number of skirts, like the Guardian Corps Skirt and the Cashmere Skirt of Healing, but something about them wasn’t jiving with them for me. My bestie then suggested something that I hadn’t really considered due to the difficulty of crafting them: the Astral Silk Bottoms of Healing. After trying them on in the interface, I realized I had to have them, if only for possible experimentation later.

Players who aren’t much into the crafting scene these days may not realize just how much of a pain in the neck it is to get materials for the Astral Silk gear (as well as the other i180 crafted items), which are primarily acquired through the weekly-locked Red Scrip currencies for both Disciple of the Hand and Disciple of the Land classes. In addition to Red Scrips, though, you also need special gathered materials that are on special, timed “Favor” nodes, and all of that results in the materials being some of the most expensive items in the game.

I don’t have a gatherer, but I do have the ability to make Astral Silk items (and Griffin Leather ones, which I ended up needing a few days alter) and a thankfully high amount of disposable income. All in all, it cost me about 4.5 million gil to make the leg piece for this glamour. For the sake of comparison, that’s around the same amount of gil as it currently takes to buy the 16 High Quality items needed to complete an Anima Weapon (and it’s even less to get the mats for those items, of course)—and these shorts are only item level 180, 30 levels below the max-level gear and outstripped by dungeon drops from the current Expert-level dungeons. I’m so satisfied with them, though, as the embroidery on the shorts actually matches up with the trim on the Holy Rainbow Shirt when it’s dyed white, and that sort of thing makes me grin like an idiot.

But that 4.5 million wasn’t the end of my expenses for this look. Originally, I paired the Silk Bottoms with the Serpentskin Fringe Boots, which I ultimately ended up wanting to use for the aforementioned BRD/MCH glamour. Because I was already using the same top for both glamours, I wanted everything else for my healer glamour to be different, which meant needing to find new boots. Given the “adventurous” look of the Holy Rainbow Shirt, the boots that fit the best were the Griffin Leather Boots of Healing, which are basically just mini-Fringe Boots. Those ran me somewhere between 3.5 and 4 million gil to make, though at that point, I wasn’t really paying much attention.

All of that ended up with this final look: 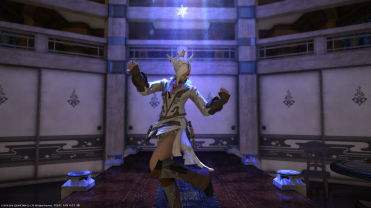 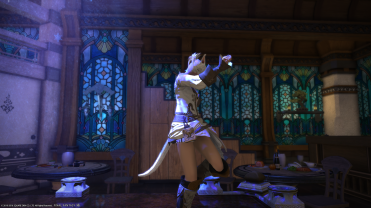 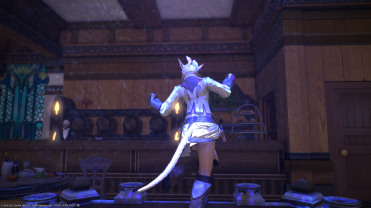 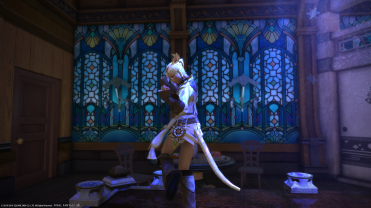 This is the first glamour I’ve showcased here that contains another obsession of mine, which is glasses. For a long time, nearly every glamour I made contained a pair of some style or another, but I’ve generally moved to only including them on Disciples of Magic or Disciples of the Hand now. This glamour’s a bit unique in that it’s one of the only ones I have that doesn’t involve anything even approaching zettai ryōiki. I very rarely use anything lower than thighboots, and when I do, I almost always pair it with stockings or socks of some kind. Despite all that, I’ve gotten pretty attached to this one so far.

Oh, and if you’re curious: the “runway” in the screenshots here wasn’t designed by me! It’s in an acquaintance’s home that’s also in the Mist.

I’ll be back soon with another glamour showcase, though once again I’m not positive which one’s coming up next!