I had intended to do a shorter post today, talking about something other than a full glamour set, and get to my caster glamour on Monday—but on Tuesday or Wednesday, it’s quite likely that, for Black Mage at least, I’ll be creating an entirely new look, as I’ll have both the Goetia Gloves and Goetia Thighboots. So instead of doing what I had planned originally, I’m going to go ahead and get this one up, in part so as to provide for a before and after sort of deal. 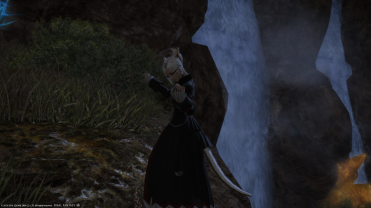 Black is a color I tend to avoid for prominent pieces in my glamours, but there’s something really snappy about the Plague Bringer’s Coat that I love. The Plague Doctor’s Coat, for healers, is just a little bit too drawl in color for me, and so once I had the caster version, I decided to use it for awhile. This look also uses the Claws of the Beast, which are a favorite piece of mine from Manderville Gold Saucer Points. There’s just something appropriate about a cat with claws, I suppose. I’ve frequently used them on my caster jobs especially, so I’m sure they’ll pop up again in the future.

The new Archaeoskin Halfboots (also available in a dyable form, the High House Halfboots) were added in patch 3.1, and they’ve become one of my go-to pieces ever since I got my hands on them. Shoes and boots that go well with a variety of stockings and the like are pretty rare in FFXIV so far, with other similar options either having a troublesome color scheme (like the wedding bootlets for females) or being just plain ugly (like the Miqo’te Shoes). They’re going to be a definite staple for me in the future (I happen to have both versions of them, with the High House Halfboots dyed Pure White, so that I have an easy way to get them in both black or white as needed).

That wraps up all of my initial glamour showcases. I do glamour my Disciple of the Hand classes, but as of right now, they’re mostly in class-specific gear, so there’s not a whole lot to show off. If I ever get a more unique look going for one of them, I’ll be sure to wax philosophical about it.