Just for something a little different, I decided to load up FFXI today and take a look at the Alahra of yesteryear. Unfortunately, this didn’t pan out as well as I hoped, as despite telling the game to take screenshots in my full resolution, it’s stubbornly refusing to do so. That said, I did manage to get a shot that shows off at least some detail: 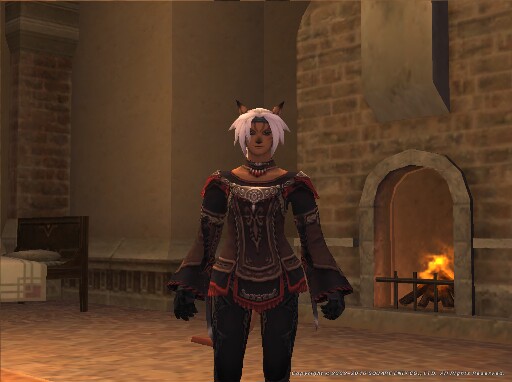 FFXI’s style lock system isn’t nearly as robust as FFXIV’s glamours, as the game lacks any means by which to dye your gear. It does, however, have the benefit of having no interaction with the Auction House, as you’re simply telling the game through a console command not to change your appearance when you switch gear.

Alahra’s look in FFXI has always been far simpler—I usually preferred to just wear some version of her Ninja Artifact Armor, but after I got my Thaumas Coat, I grew pretty attached to it, and so now she wears that instead of the Ninja Chainmail (which is much more my style than the version found in FFXIV). Though you can’t really see all of the pieces here, her gloves, legs, and feet are all the corresponding Ninja Artifact items (Ninja Tekko, Ninja Hakama, and Ninja Kyahan, all of which have their analogues in FFXIV as well). For weapons, she’s wearing the FFXI version of Kannagi.

I’m actually hoping that over the course of Heavensward we’ll see more throwbacks to FFXI gear, as the crafted Wootz armor and mail for tanks and Dragoons are upscaled versions of the Koenig and Ares sets from the older game. The Thaumas Coat is one of those models I’d most like to see added to XIV.

Oh, and just for a bit of comparison, since Alahra did keep that same hairstyle up until very recently, here’s how she looked in FFXIV before I picked up the Minfillia outfit and hairstyle (for those curious the robe is the Asuran Dogi of Healing, dyed, as always, Pure White): 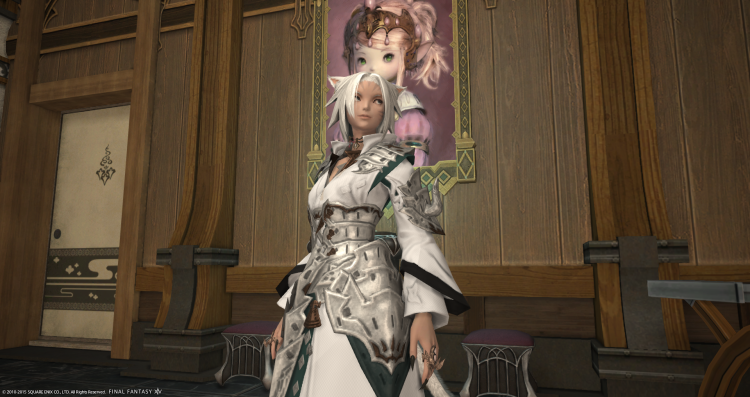 If I can ever figure out how to get decent screenshots out of FFXI without needing to use Windower again, I’ll occasionally do more throwbacks to other looks I enjoyed during my time in the game.