Brace yourselves: this one is kind of long and rambling, and I took a ton of screenshots.

A few days ago in a conversation about one of the posts here on that hive of scum and villainy called Facebook, a couple of my friends (Kitty Strife and Fal Kearst) kind of threw down a gauntlet—whether they really meant to or not: they wanted me to make a heavy armor glamour, which is something I very rarely do (because, in my opinion, miqo’tes are way too small for most of the heavier tank stuff in the game). The notion burrowed deep into my brain because I wasn’t really happy with the tank glamour I was using anyway, and so I resolved to make a new tank glamour for my Friday post. I spent a huge chunk of yesterday evening working on that.

I’ve used the Flanchard a number of times before, but I usually pair it with something like the Noct Breeches. Since I knew the subtext of the challenge (that Alahra needed to wear pants), the Allagan Cuisses were the logical pairing here, and it felt like a great place to start. But boy was I wrong:

Cuirass of the Divine War

But it looks so weird at the waist!

I couldn’t find much at all that really blended well with the Allagan look. The things that did work really didn’t appeal to me (like the Cuirass of the Divine War above) or were low-level (with the best match being the Custom-made Cuirass from the level 5 class quest—which unfortunately has no matching gauntlets). I knew the Heavy Allagan Armor would work with it, but I tend to dislike using more than two pieces of the same set in a glamour—at that point, I’m scarcely making a glamour and more going with an overall theme designed by the game’s art team. I also don’t have it anymore (another unfortunate sacrifice to the god of Grand Company Seals), so that didn’t help.

Finding gauntlets to go with the Flanchard was also a pain, but I did find a couple that I was able to dye into a reasonable facsimile of the Allagan bronze: the Sky Pirate’s Gauntlets of Fending and the Titanium Vambraces of Fending. Neither were really perfect, but I would have been able to settle on one if I had found a suitable body piece.

After awhile, I got pretty frustrated (which is actually something that happens most of the time when I’m doing a tank look), and decided to go back to the old staples of the Orthodox set, which are a bit more “neutral” and thus easier to blend with other gear. 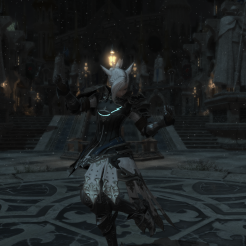 Augmented Ironworks Armor—too hard to use by itself.

…which has the same waist thing. 😦

The silver color opened up a few more options (as well as some more low-level ones, like the Mythril Cuirass I modeled in the first shot for the Allagan Flanchard), but I wasn’t really happy with any of them. By this point I realized that part of my problem was Dark Knight—it’s my preferred tank right now, and it was getting in the way of my using a couple of body pieces I actually rather adore: 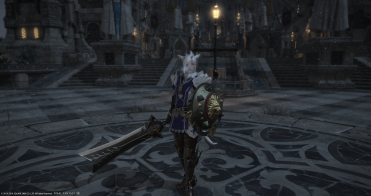 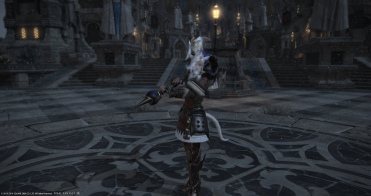 …and the stylish Fighter’s Cuirass

Both of those (the Valor Surcoat and Augmented Fighter’s Cuirass) are heavier, but manage to fit on the miqo’te frame pretty well, and I’d used both in various glamours all throughout ARR as I switched between the two classes in terms of preference. They also both look great alongside the Heavy Allagan Flanchard. But the problem is that I hardly play either one of them these days. Paladin’s gameplay has felt really stale to me ever since I hit 60, and I’ve had something of a distaste for Warrior for quite a long time—one that Heavensward only accentuated for me.

Because of how job-specific gear works with glamours, if I used either one of those, it would mean my Dark Knight wouldn’t actually benefit from the look (and since my tank’s body piece is currently the Void Ark Armor of Fending, the majority of the look would be obscured, too). That just wasn’t going to do. I knew of one job-specific body piece for Dark Knight that I thought might work, the Lynxfang Cuirass, from PvP. But I’ve been out of Wolf Marks for ages and I find Frontlines to be an annoying mess most of the time—so I wasn’t too keen on farming for it on the hunch that it could work, especially without being able to tell how it would dye.

And it was a little while after this realization that I admitted defeat:

This is heavy armor! Really! 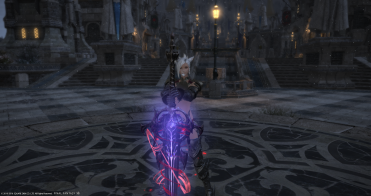 Here we have the Orthodox Gauntlets and Greaves of Fending paired with the Light Steel Galerus and Subligar (both dyed Metallic Red), chosen to reflect the crushing nature of my defeat. At this point, barring the unlikely event that there’s a body piece I’ve completely forgotten, I have no hope of a suitable tank glamour prior to 3.2 (which should add a wealth of new options, including a dyable version of the Heavy Allagan Flanchard—which will make things much easier).

Until then, I’m going to run around like this whenever I tank, which will no doubt cause ridiculous giggling fits for both Kitty and Fal.

That’s it for this week! I’ll be back on Monday to talk about a topic that’s presently unknown to me.