After my last post, I ended up bored enough over the weekend to run a few Frontlines Roulettes, which got me enough Wolf Marks to pick up the Lynxfang Cuirass. That meant I needed to sit down and hash out a way to use it, as running around like this… 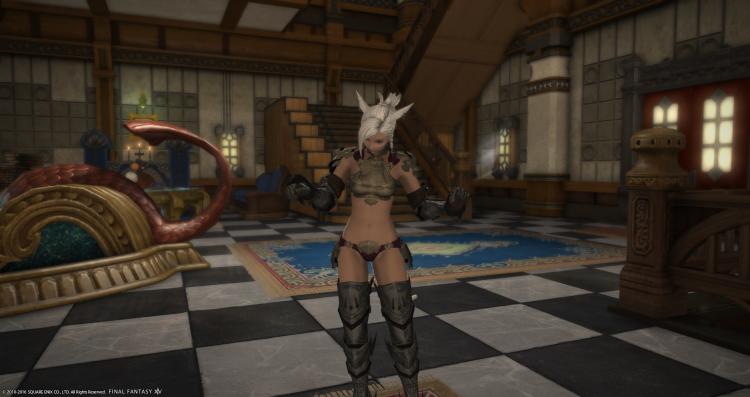 …wasn’t going to last forever, even if I was getting a kick out of it. The trick, though, was deciding on what was going to accompany the Lynxfang body. It has a pretty nice base color scheme, but it’s not one that really lends itself well to mixing and matching. Unfortunately, as usual, the bloody thing wouldn’t dye in a way that matched the Heavy Allagan Flanchard—which ends up somewhere in between Shale and Mole Brown. 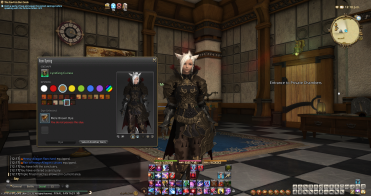 That meant I needed to find something else. Of course, as per the “heavy armor” request I talked about a little last time, I didn’t want to do what I would normally do and use the Light Steel Subligar or Noct Breeches alongside something thigh-high. I had only rarely actually used pants on tank glamours, so it took some searching to find some models that worked.

I tried a number of combinations, from the Cuirass in silver alongside the Orthodox stuff to trying to find something that matched it in Metallic Red (which matches up pretty well with the particle effects on the Deathbringer Awoken). I did stumble upon a pretty nice thing to keep in mind for the future, too: the Lynxfang set, when dyed Lavender Purple, blends together almost perfectly with the Dreadwyrm gear from Final Coil.

After awhile, though, I couldn’t find a good combination of gauntlets and boots in my normal styles, so I looked for inspiration from someplace I don’t normally go: my weapon. I settled on using the Halonic Inquisitor’s Greatsword, which has a nice black and gold motif—and the gold matches up quite well with the Lynxfang Cuirass when dyed Ul Brown (a special thanks goes to my friend Strawberryca Cake, who picked up the dye from the Kobold vendor for me!). It wasn’t long until I had the completed glamour: 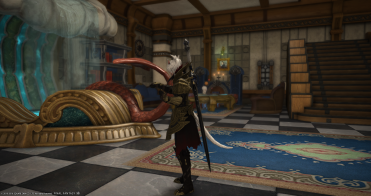 In a moment of serendipity, after I had already settled on the Ul Brown color (and had dyed the Cuirass in anticipation), I noticed that that the bits of gold on the Sky Pirate’s Boots matched the gold on the dyed body piece, which made me check the un-dyed form of the corresponding Gauntlets, too, resulting in a pretty nice black and gold color scheme for the whole look.

Once I got everything together, I tried a few different pairs of pants (my first choice were the black and gold Protector’s Trousers), but something seemed off about every black pair of pants I tried. Taking a closer look at the Cuirass, it finally dawned on me that the “black” parts were actually a pretty dark purple! A few more pairs of pants later, I ended up with the Dhalmelskin Breeches, which also have just a little bit of gold that meshes with the whole thing.

My only complaint is the red trim on the back, but that’s a pretty small thing, and I should be able to use this one until I’ve gotten my hand on whatever new goodies await in 3.2. Well, there’s that complaint, and the one that comes with using job-specific glamour gear on a role that currently shares all of its pieces with every job in that role: 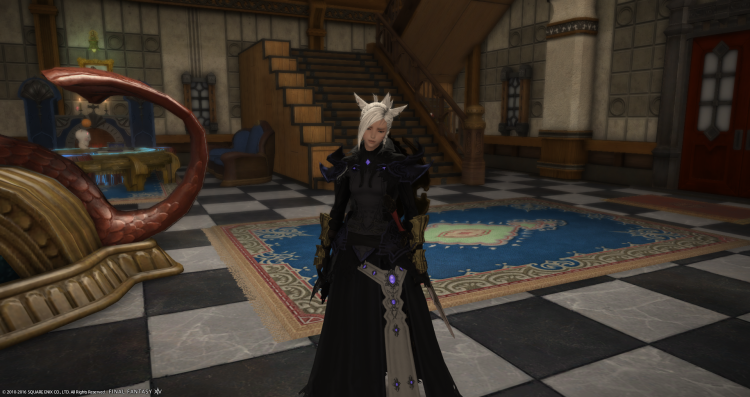 My Paladin and Warrior now look a little awkward, with the gold gauntlets alongside the dark and dreary Void Ark Armor of Fending. That’s also a small thing though, since I don’t currently play either one, though I might end up taking up sword and shield again after Paladin adjustments in the patch. If nothing else, I can basically recreate the look for Paladin with the Lionsmane Cuirass (which doesn’t have the half-skirt on it, either—so in some ways, that would be a preferable look). But, we’ll see in a little over a week!

Signing out for now, but I’ll be back soon with (I think) a look at the glamours for my three crafting Specialists: Alchemist, Leatherworker, and Weaver.