Though I wasn’t originally going to showcase my main crafting classes, I’m happy enough with them that I think they’re worth putting up. As I’ve mentioned before, I usually avoid using more than two pieces of a given set in one look, as doing any more than that sort of takes away from the whole “puzzle-solving” element that makes building glamours so appealing to me. My Alchemist, Leatherworker, and Weaver glamours all break that “rule,” but I still had fun putting them together anyway.

With that said, since there are three sets to talk about today, let’s get right to them. 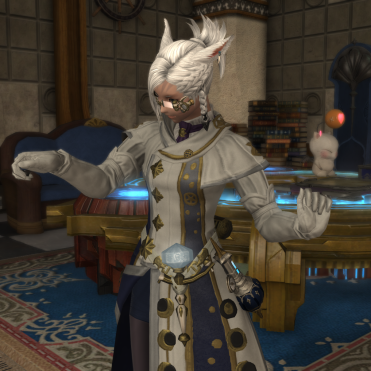 Alchemy has always been my go-to craft or profession in MMOs, which is honestly a little weird because I almost never make my own potions. There’s just something I like about it. The main puzzle for this look was finding the dye for the Alchemist’s set components that best matched the blues on the Cauldronkeep’s set.

Leatherworker has been a pretty big staple for me ever since 2.4, when I geared it out mostly to make myself a full Kirimu Aiming set for my Bard. Overall, it’s been my most used Disciple of the Land ever since, as leather covers a large number of classes for high end gear. For this one, I mainly wanted a pair of boots that would show off the Hidekeep’s Trousers, as I like the flare that they have, so the High House Halfboots were a natural choice. I experimented with a few other tops (and as I write this, I’m debating going back to them), as the pants also have a nice sash around the waist that the apron obscures.

I’ve always loved the really snappy look of the Weaver’s Swallowtail, which looks far more professional than the gaudy Boltkeep’s set from Heavensward, so despite having all of the gear, I don’t use any of it. The Weaver’s Thighboots are probably my favorite pair of boots in the game, so I couldn’t resist using those either. Though there are a lot of models that mimic the part of the Valentione Skirt I needed, none of them dye as sharply as it does (since the black bit stays in place regardless of color). Naturally, Alahra looks best in white and black, so the colors here are self-explanatory.

If they ever make the quagmire that is Red Scrip materials simpler to navigate, I’ll probably work on acquiring the dyable versions of the sets for Alchemist and Leatherworker. For now, though, I’m quite happy with the default color schemes for both of them.

I’m not sure what I’ll be covering next—but we should have preliminary patch notes sometime over the next couple of days, so I’m hoping we get at least one more gear preview buried within them to talk about before 3.2.