While I have an idea for a new Monk glamour, I need a dungeon drop to make it happen, which is going to take some work on my part. So while I can’t put that one together yet, I was thinking back to my early Heavensward look, and I’m fond enough of it that I thought I would share it here. It’s a mix of some of my favorite pieces, so some of it will probably look a little familiar: 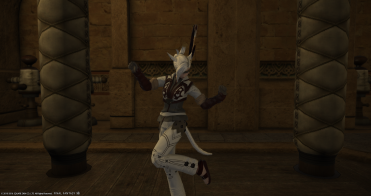 Since I’m currently using the Wyvernskin Jerkin for my Disciples of the Land, I don’t want to go back to this for my Monk glamour, but I still simply love the look. Since 2.5, I’ve loved the way the various Jerkins look with the Trousers, and the Wyvernskin one has a much better dye pattern than the pre-50 ones, since the midsection actually changes, too. The red trim also makes this one of the few tops, outside of the Foestriker’s Tabard itself, that really looks right with the Foestriker’s Mitts, too.

The Temple Circlet has always been a favorite piece of mine, and I use it pretty frequently with Monk glamours. The Kirimu Sandals are mostly just to show off the slight flare on the Ramie Trousers, but this look would work with a lot of different boots and shoes. While I didn’t particularly design this set around the Sphairai Nexus, I’m always a sucker for those glows, and I think it’s kind of cool having something that actually looks a bit like Fists of Fire for Monk.

I’ve considered porting this look (or something like it) over to my other Disciple of War jobs, since most of them have access to the Ramie Trousers as well, but I still think it’s most fitting for Monk. I did use something similar for Ninja in the past, which I might show off sometime, since it uses a few different pieces, though.