Of all the new gearsets added to the game with Heavensward’s initial 3.0 patch, I’d have to say that The Aery got some of the best. The various Orthodox sets for the Disciples of War are simply lovely (the caster and healer sets—most notably the gloves—are nice, too, but I’m not really a fan of bulky robes), and for awhile, I used them on all of the respective classes for glamour. I simply love the style of the Orthodox Aiming, Scouting, and Striking sets, but I did have one complaint: the colors were kind of…drawl, and I generally prefer much sharper looks (which is part of why I settle on white and black so much).

So, while I was disappointed that we didn’t get entirely new models for the dungeons added in Patch 3.2, I was also hopeful that the new recolors for the Orthodox sets would make them better for more permanent glamours. In general, I’m not actually a fan of the recolors we got for various reasons, but the Dravanian Striking set definitely stood out as both visually distinct and much better-looking than its Orthodox counterpart. Since I finally got the body while farming for my Hyperconductive weapon on Monday night, that meant it was time for a new Monk glamour. 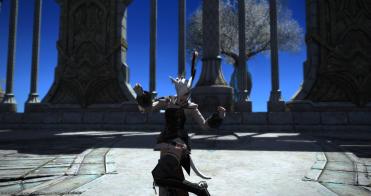 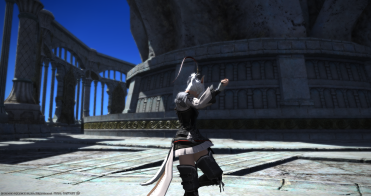 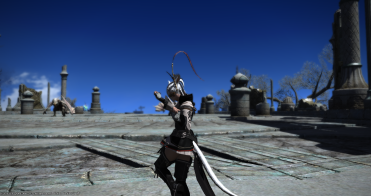 This is, for the most part, a recreation of the glamour I used while leveling Bard, Machinist, and Monk, just with the colors modified to match the recolor of the Dravanian Tunic (and yes, right down to the Coeurl Beach Tanga, which I dyed to match one of the colors in each set). For awhile at level 60, I was using all three sets since I was still waiting to pick up the Iga Ningi for Ninja. I was always rather fond of the look (I love the hat too, but it feels weird on Monk!), and with the better color scheme available on this new version, I’ll probably hang onto it for quite awhile.

I’m also currently aging a Ninja glamour in the wine cellar after picking up my Hyperconductive Kannagi—the glow on it just really clashed with the Metallic Silver look I was using before. But that one needs a little bit more time, as I’m still debating internally the merits of various pants (yes, pants!) and boots for it.

Oh, and just for fun, here’s one more screenshot I took while prepping for this that didn’t really work for displaying the look, but I liked nonetheless: