I’ve actually been working on this glamour for awhile now, and it wasn’t until just before I went out of town at the beginning of this week that I got it to a point of satisfaction. As I mentioned last time, I needed something new to work with my upgraded Anima weapon, and things just weren’t coming together. Inspired by my old Zeta glamour, I wanted to go with something that was a bit out of my normal glamour box, and after a full week of hand-wringing, here’s where I ended up: 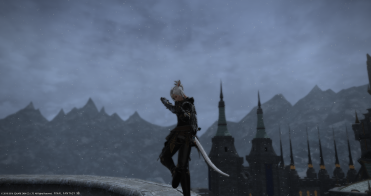 I’ve been running around with different variations of this overall look since last Tuesday. I settled on the Wind Silk Coatee early, and of course, the Replica Allagan Gauntlets weren’t going to go anywhere. (One day, we’ll get a better pair of gloves for Ninja, but today is not that day.) The legs and feet options had me perplexed for the whole week, though. I experimented with a lot of different things: Ninja Hakama, Ramie Trousers, Expeditioner’s Thighboots, Archaeoskin Halfboots, Gaiters of the Falling Dragon (which is a set I generally have a strong distaste for), and even the Starlight Boots (which would have been perfect if it weren’t for the stars).

By the middle of the week, I was mostly set on using the Falconer’s Bottoms, and I ran around with the Gaiters for a few days, but something wasn’t right in the color balance, and it’s sort of because of the Wind Silk Coatee, which uses two “types” of black: a somewhat duller fabric color for the front and the “shiny leather” black on the back. Most of the pieces I’d been playing with worked with the latter but not so much with the former, which made things look strange from the front.

By the end of the week, I had just about given up on the look, but I got lucky. I got one of the achievements for collecting Orchestrion rolls, which meant I needed to visit Jonathas in Old Gridania to pick up my reward. As it turns out, I was actually long overdue for a visit (I think I had six or seven achievements to collect on), and one of the rewards I got was the Field Commander’s Boots. They fit into the look really well—despite being leather, they don’t have the same sheen as the other pieces, which restores a bit of balance to the overall aesthetic.

I didn’t settle on them right away because a member of my Raid Static happened to end up using them the exact same day. At first I wanted to find something different (since he had also glamoured the Wind Silk Coatee), but I ended up preferring the boots so much that I went with them anyway.

After the boots were in order, I kept having this feeling that I needed some sort of headgear for this one. I would normally go with glasses here, but they didn’t quite jive with the look, and I couldn’t find any hats or circlets that I liked either, which left eyepatches. Most of the game’s eyepatches cover the left eye, which is strange given my present hairstyle, so that meant the Gryphsonkin one was the best fit. I’m still keeping my eye on other options, though, as I’m not quite happy with the fact that its strap stays white.

I suspect that I’ll be sticking with this one for the rest of 3.2. 3.3 will bring new 24-man gear, as well as the next Anima stage (at least, according to the last we heard from Yoshi-P), so by then I’m sure I’ll be due for a change. In the meantime, I’m idly fiddling with new looks for BRD/MCH and my healers.