It’s been a really long time since I’ve looked at any headgear in the game, since I’ve been so busy redesigning all of my glamours every three days. I also had a lot of other work to do today, so with those two things in mind, I want to talk about how much I love this hat:

There actually aren’t that many wide-brimmed hats (the sort of thing Red Mages traditionally wear in other FF titles). Most of the available options are restricted to Bard and Machinist (and sometimes, just Bard, in the case of the Choral Chapeau). The one above is the Dravanian Tricorne of Aiming, but there are six total models for it (four more of which are pictured below): 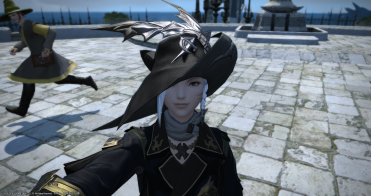 This tricorne model in particular wins out over just about all of the other options because it’s relatively tame. Other examples of similar hats, like Amon’s Hat or the Demon Hat of Aiming are way over the top to the point of being somewhat comical. Other nice options include the Choral Chapeau, of course and the Ballad Crown from Labyrinth of the Ancients.

When it comes to the Dravanian/Orthodox ones, I do wish they had differentiated the colors somewhat on the sets, but at the same time, it’s kind of nice that they’re all in relatively neutral colors, since that makes them more applicable to a variety of outfits.

If it weren’t for what I perceive to be some clashing with my hairstyle, I’d probably be using one of these for one of the three roles (probably BRD/MCH). I used all three of the Orthodox ones for quite some time back when I had the FFXI Face 6A hair.

That’s all for today—sorry for the shorter post today! I didn’t budget my time all that well this morning!