As I’ve talked about before, I’m generally not much of a fan of FFXIV’s heavier armor—at least, not as someone who plays a miqo’te female. Very little of it really fits their smaller forms (female Au’ra have similar trouble, in my view). For various tank glamours over the past couple years, I’ve leaned a lot on lower level armor, but I’m always ambivalent about doing so, since lower level armor is frequently much less impressive.

My go-to body armor has been the Mythril Cuirass for a very long time, and I stumbled on a look for it that I’m still really fond of around the time I got my first tank to level 60. 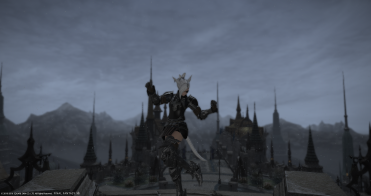 Other models of the Cuirass can, of course, work for a similar overall look. The silver accents on the Mythril one tend to be the easiest to work with though, and so I generally default back to it. The Orthodox Gauntlets and Greaves work well alongside the silver in the Cuirass, and the Noct Breeches work well for a more “agile” look. The eyepatch is a holdover from when I was leveling Dark Knight originally—somewhere in the 40s I glamoured it on a whim and got pretty attached to it in a thematic sense. I had different hair back then that it worked better with, though.

The sword on display is the Weathered Arondight, which is actually probably my favorite greatsword in the game at the moment. Its silver accents are perfect here.

There would be a lot of ways to fiddle around with the basic look. The Cuirass itself works in a variety of colors. I’ve used it in Pure White and Metallic Silver as well, but it also works well in primary colors, depending on what other pieces you’re working with. That flexibility makes it a pretty valuable piece. The Dravanian Gauntlets and Greaves would naturally work in the same way that the Orthodox ones do (with the body and legs dyed Wine Red perhaps). The level 60 Chimerical Felt Breeches of Fending also work in place of the Noct Breeches—they dye differently, so which one works best probably depends on the color of the body.

While I designed this glamour for Dark Knight, I’ve also used similar looks for Paladin, using the Weathered Burtgang and Weathered Noct Hoplon (I prefer them without the particle effects). The Custom-made Cuirass has some red bits that match the same on the sword and shield, which is always pretty cool.

I’m hopeful that we’ll be seeing more “light” armor choices for tanks in the future. We still don’t really have a lot to work with, though the new High Mythrite Cuirass of Fending is a good start (though I think it looks funny on me). We haven’t seen any gear previews for the new gear from Weeping City in 3.3, but I’m crossing my fingers that we’ll get something that, at the least, isn’t a glorified Tank Robe.