I’m not really sure why, but I was thinking about one of my older caster glamours again. As I’ve mentioned before, I very nearly switched to Black Mage as my main class during the Second Coil tier (but by the end of it I did settle on Scholar). I’m not ashamed to admit that one of my reasons for that was the Evenstar Tights. I really wanted to pick them up, but it was hard to justify for a class that wasn’t my main. So, I switched mains, and that meant I also had to figure out a glamour based around the tights. 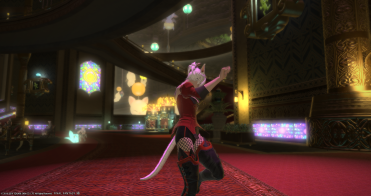 I’ve shown off this look before of course, when I talked about the glamour I had before this one here, but I never actually got around to showcasing it for the full list of gear involved. In general, this look isn’t particularly unique, as the Tights have always been a pretty popular choice for caster glamours. A number of folks that went with a coatee back then seemed to use the Vintage Seneschal Coatee, though, which doesn’t really match the bright colors in the red on the Tights, so that one never really worked for me. The Evenstar Hat was also a really popular choice (for obvious reasons), but it just looks weird to me generally.

The Lominsan Officer’s Boots match up to the shade of red perfectly as well, and they’re actually the only pair of footwear I like to use with the Tights. Sadly, the recolor of the Evenstar set (Serpentskin Casting stuff) uses a shade of purple that I’m not particularly fond of, so I never really revisited this look when I got Black Mage to 60.

The glasses in use back in 2.2 were different, of course (Oval Reading Glasses, I believe), but the Elegant ones work much better with my current hairstyle.

As I mentioned originally, I eventually stopped playing Black Mage because I was never quite happy with this look. It’s just not really fitting for Alahra, I suppose, as the top in particular just doesn’t seem very functional. I still like it quite a bit, though, and if I didn’t care about functionality so much, I’d probably use it to this day.