First off, I am in love with crafting again. 3.3 brought a lot of much-needed changes to the overall endgame for crafters and gatherers. Red Scrips are now useful but not mandatory, as there are numerous paths to get gear for both classes, and there are also numerous paths to get materials for making the new gear. The main materials for the new Ironworks gear are luminous fibers, which are made from glass fibers: glass fibers come from a variety of things, like Moogle Beast Tribe quests, desynthesis, and the Aquapolis. Because of that, there’s no one bottleneck preventing the creation of the new stuff. The biggest problem with the original system was that the materials were locked entirely behind Scrips, and Scrips were needed both for materials and for gear, creating something of a catch-22.

That’s no longer the case, and it’s wonderful. I’m seeing groups of players huddled around key areas crafting in ways I haven’t seen in a long time, which is a great sign. Personally, I’ve not enjoyed crafting to this degree since 2.4 or so, which was over a year ago now. It’s great to get back into the thick of it, and I’m remembering greatly just how satisfying the activity is when the system actually works! In fact, I’m crafting so much, my poor Anima weapon is suffering some serious neglect!

But that’s not what we’re here for, anyway. I finished crafting my Ironworks gear of Crafting over the weekend, and as always, that means a new glamour. 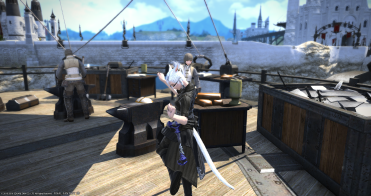 The pieces are lovely all around, with a very crisp aesthetic, and they dye perfectly. You can’t really tell from these shots, since I went with an entirely black look, but the prominent black pieces of the set stay black, regardless of what color you use. An additional plus is that they don’t really “two-tone” with your dye of choice to a significant degree: the only bits that change are those that are blue on the normal set, and they don’t go with a wildly different hue or anything. This makes the pieces look great in a number of colors while keeping a really sharp look. It’s a damn shame they’re only wearable by Disciples of the Hand, really.

Against my normal inclinations, I did end up using three pieces of the full set, and I also went entirely with black. I liked the slimming effect it had on the apron, though, and so black became the obvious choice for everything else, too. I wasn’t overly fond of the Cap or the Sleeves from the set, so I needed to do something with those. I’ve always thought the angular Reading Glasses fit the Ironworks aesthetic fairly well, so that was an easy decision. It’s worth noting that the Cap does have a /visor effect, though, to lower the monocle on it! That’s actually pretty neat, and I almost used it just for that. Finding gloves that really worked with the sleek look of the Apron was tough though, so I eventually decided not to use them at all, favoring the Claws of the Beast instead.

Before long, I’ll probably have  a set of the corresponding Gathering gear, too (and a new glamour to go with them), but I’m trying not to craft myself into poverty at the moment. Now, if you’ll excuse me, I’m going to go act like I’m going to work on my Anima for the rest of the afternoon and end up crafting instead.