A little while ago, I made Eikon Cloth/Leather Aiming gear, which meant Bard and Machinst were back to sharing gear, and so I needed a new glamour that would work for both of them, since I’m not really settled on which one I enjoy more. I’ve been trying to collect the whole Wrangler’s set—which is what I really want to use—since the launch of 3.3, but so far, I’ve not had any luck getting the body piece, which is the main thing I need.

So, I’ve been running around with a bit of a placeholder. It’s nothing fancy or special, really, and I honestly think it’s a bit too generic, but I don’t really play either job enough to warrant spending forever on a glamour for them either. Since I’ve stuck with it for a couple weeks, though, I figured I might as well put a post up for it. To make things more interesting (for me at least) I took the screenshots in someplace new. 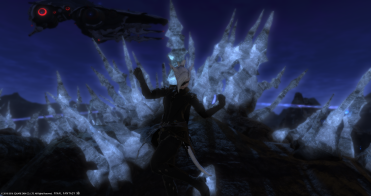 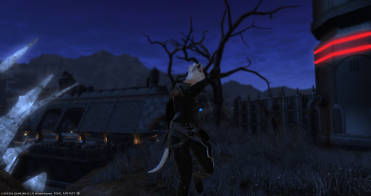 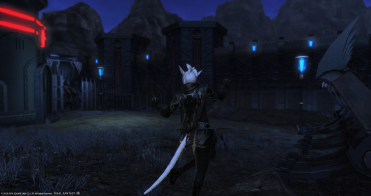 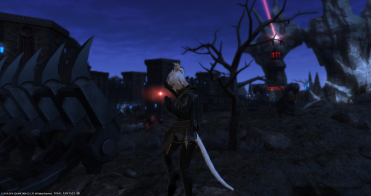 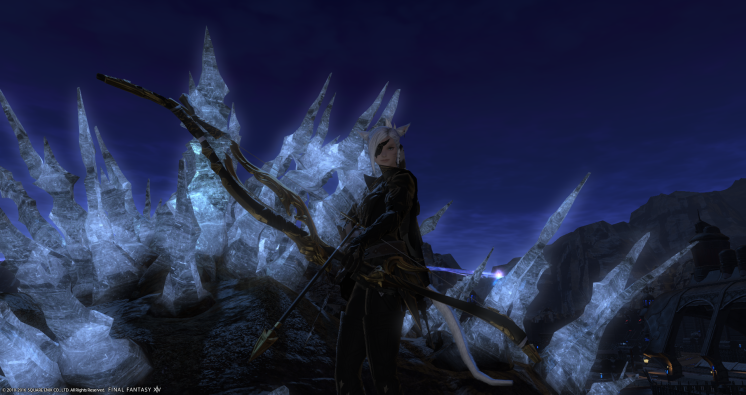 I’m really been using a lot of Jet Black Dye lately, which is somewhat unusual. Ultimately, though, I can’t escape the fact that I like the way Alahra’s white hair contrasts with black gear, I suppose. I’ve resigned myself to not fighting it in general when it works for a look now.

I’ve not been able to find much that really goes well with the Oschon’s Gauntlets and Sollerets, which is disappointing, since I was originally quite excited to get them. I’ve burned out on PvP, and Fields of Glory really didn’t catch my interest, so I probably won’t pick up the body piece from the set until they introduce new PvP gear and (hopefully) lower the cost in Wolf Marks for the older sets.

One nice thing, though, is that the highly increased availability of the various Favor mats from Red Scrips meant it was easy to finally get the Griffin Leather Blinder. I also made the Thighboots a little while ago, but I wasn’t happy with the way they dyed, so I don’t see myself ever using them over the older Bogatyr’s Thighboots.

All in all, though, I’m actually looking forward to moving on from this glamour. It’s certainly functional, but I don’t find it very exciting (not to mention I still don’t really like the leather “cape” thing on the back of the Wind Silk Coatee). Hopefully, my luck pans out in Expert sooner rather than later, as I’m also not incredibly fond of playing Bard in dungeons!