It’s funny to me, but in a way, maintaining this blog has started to affect my glamour habits. In some ways I’ve become more picky, and in others, I think I’ve gotten a bit more lax than I used to be. When it comes to Ninja, I’m pickier than ever, because updating my Ninja glamour here on the site is a momentous occasion (not to anyone but me, but still!). On the other hand, when it comes to alt jobs and classes, I’ve found I’m generally more accepting—perhaps out of a want to continually have new things to post here!

After running around with a few of my recent glamours for a little while, I realized they weren’t quite “done,” though, and so I made some minor tweaks to them over the weekend. All of them are just tiny changes really, mostly to fit my little idiosyncratic preferences.

While I do love the whole Ironworks aesthetic for crafter, I found myself missing my usual thighboots. I also wanted to reduce the number of pieces from the full set that I was using, so I went from this:

…to this, swapping in the Valentione Skirt (with Jet Black Dye) and Expeditioner’s Thighboots (ditto): For gatherers, I was mostly tired of the Ironworks Slops of Gathering—they just didn’t blend well with the Expeditoiner’s Thighboots, and I couldn’t find another pair of boots that worked with them. The change from this:

…was really easy, as all I needed to get a better look was swap in the corresponding Expeditioner’s Pantalettes (Jet Black again, of course): And since I try to avoid using the same boots on too many looks at once, I also went ahead and swapped out the boots for my healer glamour from the Expeditioner’s Thighboots:

…to the Adept’s Thighboots, which I haven’t used as much as I used to: 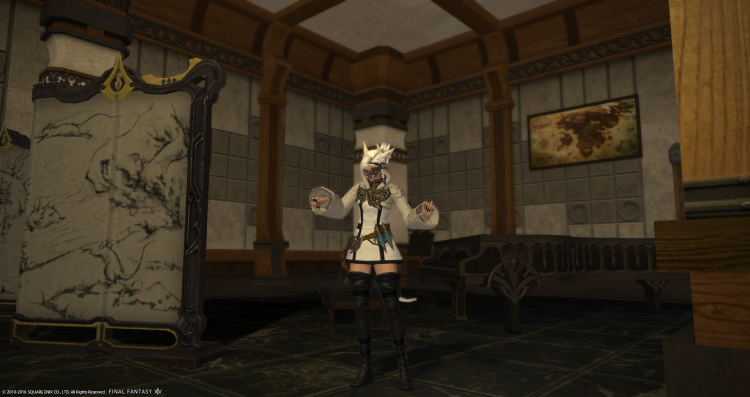 I’m also in the process of reworking my tank glamour—I had gone back to using the Lionliege pieces for Paladin that I used awhile back, but I’ve honestly really been itching to play Dark Knight again, which meant the job-specific Paladin gear wasn’t showing up. I’m not really sure what I want to do yet, but for now, I’m using the Halonic Inquisitor’s Cuirass and Gauntlets so I can play DRK without looking silly: 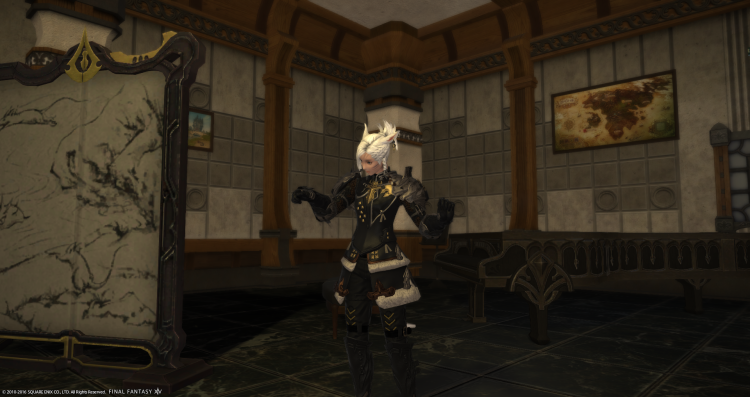 I’m also heavily debating using the Replica Dreadwyrm Cyclas of Scouting for Ninja, since it’s got a bit of an Eastern vibe to it, but as of yet, I’ve not stumbled on any combinations that really justify a new glamour. The main trouble here is the boots (as usual), though color is also tricky. 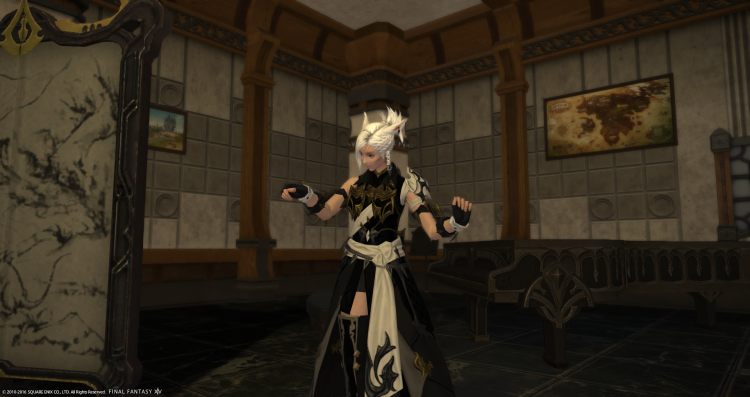 I think that’s about where I’m at on the glamour front, and unless I make any major breakthroughs, I think my next post or two may be about more general game things. But we’ll see, sometimes I surprise myself!