I’ve mentioned before that my glamours have to make “sense” most of the time—I need to feel like they could actually be worn into combat, so I shy away from bikinis, especially for tanks and melee jobs. For the most part, I haven’t really been a big fan of most of the swimwear in the game for females (I actually think the male ones are much more interesting, generally).

I’m actually a rather big fan of the new Moonfire set, though, and the Halter is actually somewhat workable for glamours for me. I’ve been fiddling with it for a few days now, mostly focusing on possibilities for healers and casters. So far, I’ve not been able to find the right combination for a permanent glamour, but I do have a look that I’m actually quite happy with that doesn’t really seem to fit any of my classes closely enough that I want to use it. 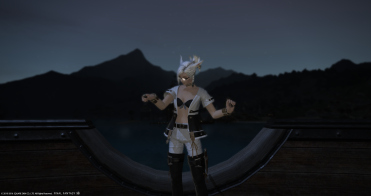 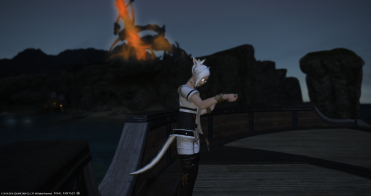 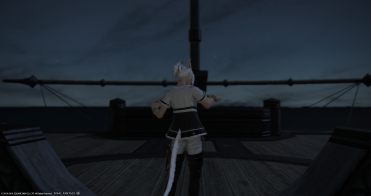 I really like the Survival Slops paired with the Halter this way, since they create that nice black and white split I’m so fond of. The boots are of course a natural choice here. Where I’m really stuck, though, is what to do for gloves and some sort of head piece. For this to really click for an actual battle job, I would want something that made the whole thing seem not so defenseless.

I tried a number of gloves, like the Brand-New Gloves, Warwolf Gloves of Casting, and Expeditioner’s Gloves, among others, but nothing really fit the sleeves of the Halter that I could find. Most gloves either seem to be too bulky or too small, leaving the overall look with a kind of vulnerable appearance that just doesn’t sit well with me. Some sort of hat would be nice for a caster look, too, but I’ve not yet found anything that feels really fitting to me.

I think if nothing else, I’m going to save this look for an idle/casual outfit, though!