Last night after I got home from GenCon 2016, I rushed to get enough of the Moonfire Faire event done to pick up the majority of the new glamour gear. From the preview images we’d gotten prior to the start of the event, I was sure I’d be able to use the Legacy Warrior Breeches—which seemed to have a skirt and leggings combo sort of like the Amatsu Haidate from last year’s Rhapsodies of Vana’diel cross-over event—in conjunction with the Iga Ningi. I’ve still been waiting for something to come along in terms of leg armor that really works with the body on a Miqo’te frame, and I spent a lot of the weekend on Twitter checking out screenshots of the new sets and the like.

I was incredibly disappointed once I got the Legacy Warrior Mail to learn that the skirt portion is actually part of that piece instead. On top of that, the skirt portion of the body does that weird “wide” thing around the waist so common on the more slender models (especially on tank armor pieces like the Cuirass of the Divine War). At this point I’m almost convinced the skeleton for gear mapping used on Miqo’te and Au Ra females is slightly out of alignment or something, but I’m not absolutely positive, because other similar pieces fall much more naturally. 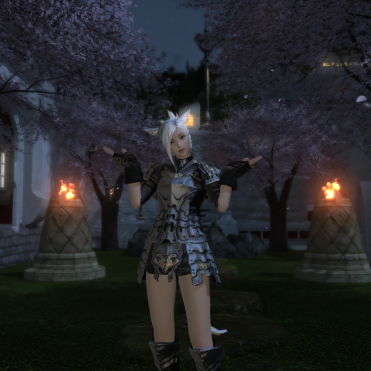 If it weren’t for the strange wideness of the waist on the Mail, I could see a lot of uses for it—we don’t really have a lot of good chainmail/breastplate options for non-tanks (other than Dragoons, anyway, who have some nice options), and the Legacy Mail would have given me another option to use for “armored” looks. Instead, it looks like I’ll mainly be falling back on the original Allagan Cuirass for the classes that get one for awhile yet (the High Allagan Cuirass has the same wide waist as the Legacy Mail, which really bites, because it’s such a cool piece otherwise).

To make matters more annoying, the Breeches are “baggy” around the hips, which almost always looks strange to me on the more slender character models (namely Au Ra and Miqo’te Females—many similar pieces look great on Rogadyn and Highlanders especially). While the Breeches lose that quality when paired with Thighboots, wearing them with Thighboots leaves the only part of them that dye unseen, limiting to some degree what you can pair them with, since the actually visible portion stays black. 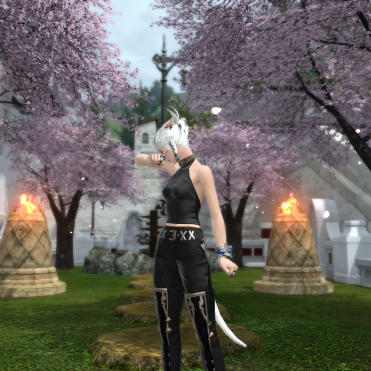 That’s a problem for me, since I really want to go back to the Iga Ningi in Pure White—but that means my leg choices are limited to things that work in Pure White themselves or in some shade of Grey, to match the secondary coloration of the Ningi’s scarf. Metallic Silver does work all right in terms of colors with the Breeches, but in general there are better body choices for a Silver look (namely, the aforementioned Allagan Cuirass, which I’ve been using for quite some time now).

I don’t have specific grievances with the Legacy Warrior Armguards, although I can’t ever see myself using them. I can’t really think of a way to describe it succinctly, but they look too…weighted on female Miqo’tes. I think they would look a lot better if they were longer, like most wristguard types of gloves are, extending up to the elbow. The profile just seems off, especially with how narrow the leather portion of the Legacy Mail is at the shoulders. They’re neutral enough that I could see them fitting into some looks, though, so I haven’t written them off entirely.

All that being said, I love the Legacy Warrior Sabatons, and I may try to incorporate them into a glamour at some point. Just messing around with them, I really like how they mesh with the Ninja Hakama, and if I could ever find a top that worked with those (another neverending story for me), I could see them really complementing them.

Of course, even if I don’t really see much use for the set as a whole, the poses look like they’ll be a great deal of fun. I’m hoping to get them tonight, but I’ve also got to make sure I’m capped on Lore, since I didn’t quite finish that up on Tuesday before I went out of town.