We’re at that point in this raid tier’s patch cycle where I’ve largely acquired all of the pieces I’m currently interested from a glamour perspective. That means many of my glamours are rather “set,” barring random moments of inspiration, or blessings from the random number generator (which would, for now, take the form of finally getting the Wrangler’s Jacket). As such, I don’t really have anything new to report, and so I thought I’d showcase an older glamour.

I know that not everyone glamours while they’re leveling, as it can often result in expending a lot of glamour prisms. I like the leveling period as a chance to experiment with items I’ve never been able to really settle on using or looks that I would never consider for a “permanent” glamour at the level cap.

When I leveled White Mage from 50-60, I did just that. I had one glamour from 50-57 or so, and then I used a second one for the rest of the time prior to 60. The first glamour was one I would definitely never use permanently, but at least for now, it’s not the one I’m talking about (it’s kind of one of those embarrassing really skimpy things, but maybe I’ll post it another day). The second glamour involved a couple of pieces I rather like but that I’ve rarely found solid looks for. 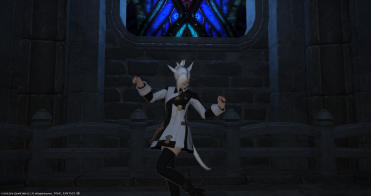 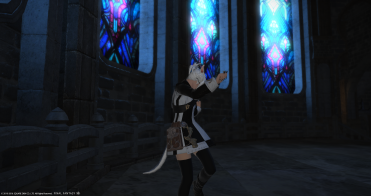 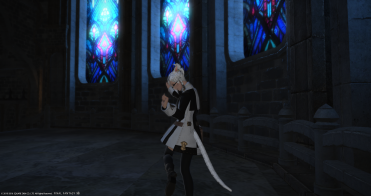 The Company Tabard is a great piece for more formal or professional looks, and it additionally doesn’t dye in a two-tone fashion. The black on it stays no matter what you do, which gives it a lot of potential for various classes and in various combinations. That I can recall, though, I’ve only used it for this one glamour, and I think it’s because it’s a little too long. As you all know by now, I tend to favor thighboots for footwear, and the length of the Tabard makes it clash with those. But the length is also long enough that it looks off to me with most pants, too, since the whole thing looks a bit more like a dress than anything else, at least in terms of that length. Since I’m not generally fond of glamouring mostly bare legs, working with a pair of knee-high boots has never really sat well with me either.

The Bridesmaid’s Tights, another piece that I’ve only rarely used, provide something of the best compromise that I’ve found. I often have trouble using these, too, as while the tights themselves are probably my favorite example of tights in the game, I’m not a fan of the embroidery or shape of the bottoms that go with them. That part looks out of place with a lot of the pieces I would consider it for (compared to other similar options like the Light Steel Subligar), largely because of the size. The length of the tabard deals with that part nicely, and the Tights themselves are a little shorter than other thigh-length items, so the two pieces pair really nicely together.

I didn’t care for this as a permanent glamour, though, as it simply looked too vulnerable, largely because of the tights. I do wonder if I could find something that worked better for Casters with the Tabard, but I play them so rarely that I’ve yet to really play around with different combinations for them.