It feels like ages ago, but for awhile I was planning to make a Machinist-specific glam using the Machinist’s Goggles and Machinist’s Shirt. I never got around to doing that, though, since I started playing Bard more regularly and eventually moved to the shared Aiming gear. I was pretty happy with my Aiming glamour, so I hadn’t really thought about either piece in awhile.

Yesterday, though, I got the 240 Augmented Torrent Tights of Aiming. Whenever I get a new piece of dyeable gear, I always take a look at it to see if it dyes in an interesting way. Much to my surprise, unlike the Scouting equivalent of these tights, the Aiming ones have a much nicer “leather sheen” when dyed, and that sparked my glamour itch, and I suppose the Machinist’s gear had been hiding in the back of my mind, because the Shirt was one of the first things I went to. 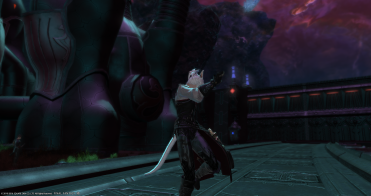 As usual, I defaulted to the Bogatyr’s Thighboots of Aiming initially, but something about them seemed off with the Torrent Tights. The difference in the tone of the blacks  between the two didn’t quite work. At that point, I remembered the Sky Pirate’s Boots—a pair that I’d made a long time ago but never really gotten around to using. They dye with that similar leather sheen and (I found this out after I had them glamoured already), they actually have a little bit of a red-orange spot on the back that matches the goggles, which is the kind of little detail that I love.

Sadly, I couldn’t keep the Ironworks Vambraces of Aiming here, as the blues didn’t fit in with anything else on the outfit. They’re probably my favorite Aiming gloves (especially for MCH), and they look great with the Padjali Revolver, but they had to go. The Bogatyr’s Gloves have are a black that’s closer in character to the black on the Machinist’s Shirt, which works well. I don’t think they’re perfect (I would prefer longer gloves since I’m not a huge fan of the Shirt’s sleeves), but they were the most fitting pair that I could find.

That about covers it for this one—overall, it was a pretty easy glamour to put together. I didn’t have any major trouble or handwringing to worry about. All of the pieces dye very nicely and complement each other well, which is nice after all the trouble I’v ehad with Ninja!