The reconstitution of my gil hoard continues on Balmung, so I’m still not actively hunting for new glamours (though I’ve definitely got the itch too, which is killing me). Something or other made me think of another old Monk glamour, though, and it’s actually probably one of my all time favorites.

After I finished spending Esoterics for Ninja in early Heavensward, for some reason I decided that Monk was going to be my “official” secondary after Ninja. Why I thought going double melee was a good idea I can’t really tell you, but I think in a lot of ways it came down to glamour possibilities because I really liked the Tantra Chestwrap. After I finished getting Monk’s Esoterics gear, though, I pretty much completely stopped playing it (which should really be expected, since my Ninja was always going to be better geared).

Still got some cool glamours out of the deal, though! This one came hot off the heels of my obsession with the Amatsu Attire, so it shares some components with one of my Ranged DPS glamours from around the same time. 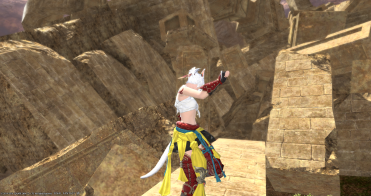 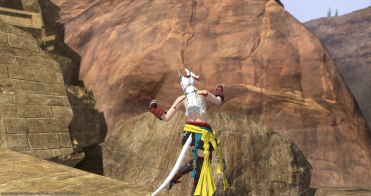 The red and white on the Chestwrap work rather well with the Amatsu pieces, and of course, this one also meets my preference for body pieces that have a major white component. I’m actually not fond of the way the Chestrwap dyes at all, since it tends to lose a lot of what makes it pop when you take away the white. It doesn’t help that it has a variety of colors, too, of course (which never plays all that well with dye). There’s something that’s very “Amano” about the set as a whole, if you think back to a lot of the older Final Fantasy character designs. That does make it difficult to work with in many ways, but it’s definitely very striking (oh hey, a gear pun!) when you can make it work.

As best as I can recall, this is only one of two instances where I’ve used the Hempen Pantalettes in a glamour. The Lady’s Knickers (White) sort of worked here (and I’m pretty sure they’re what I started with, but they didn’t quite match the fabric on the body piece, which made them seem out of place. The Pantalettes don’t either, of course, but since they’re dyeable, they blend in with the red sash much better, and the white trim on them keys off of the top even if it’s not all that visible.

I did, when I pulled out everything to play dress-up for the screenshots, test out the newer Gryphonskin Pantalettes to see if they might work. Because of their dyeing pattern, though, they don’t mesh in the same way the others do. They do that annoying two-tone thing, and there’s just no pink on the rest of the outfit to work with. They do look better than the Lady’s Knickers in Pure White, but they still clash in a way that makes me prefer the Hempen ones in Dalamud Red.

Friday’s post will probably be another older glamour, going back to some much older ARR/2.x stuff. But these things are subject to change!