This won’t come as a surprise to anyone, but as soon as I saw Y’shtola’s Heavensward outfit was available on the Mog Station, I bought it. I’d been hoping we would eventually get her outfit ever since she got her new threads in the Main Scenario, most especially because of her boots. The Scion Healer’s gear appeared in the game’s files a month or so ago (or maybe earlier, but that’s when I was first alerted to them!)—my original guess was that both that and the Scion Rogue’s gear (Thancred’s new outfit) would be the “secret” glamour items that come from FanFest tickets.

I’m glad I was wrong, though, since that meant we got these much earlier! You get three items total: the Scion Healer’s Robe, the Scion Healer’s Halfboots, and the Scion Healer’s Halftights. The last item is, as far as I can tell, the exact same model and color as the Lady’s Knickers (Black), which is kind of disappointing (makes the set kind of nice for folks who don’t already have the Knickers, of course). Despite that, though, this package has a lot more usability than the previous female Scion ones, since some of those were multislot items that you couldn’t mix and match. The set also comes with Y’shtola’s new haircut, much like the Minfillia “costume” did for hers.

Naturally, I wanted to use the set for a glamour. I debated back and forth between casters and healers, since casters really don’t have a lot in the way of solid boot options, but in the end I felt the style of the robe was better suited to the casting animations for healers versus those for Black Mage, specifically. I was fairly conflicted, since I was really happy with my last healer glamour, but I can always go back to it later if I think of another way to use some of these. 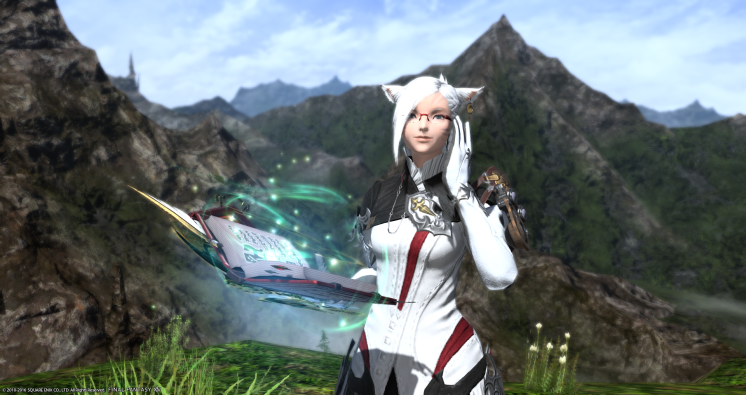 In a lot of ways, this look is a return to form for me for healers: I’ve been glamouring robes and tabards with the Light Steel Subligar and thighboots (the item names of boots are starting to get a little funny, honestly, as I don’t think I would call these halfboots at all) for almost as long as we’ve had glamour. I’ve had various glamours that follow the same pattern (I was actually planning to show off an old Bard one that did today, before this new stuff got added to the Mog Station), and I suppose in a lot of ways it’s my “default” look.

Color combinations were really straightforward here. A little red to match the red on the robe and the platforms on the boots, and white for the gloves to line up with the sleeves. I’m rather happy with the way the Hailstorm Gloves blend in with the Scion Healer’s Robe—unless you look closely, they generally look like they’re part of the same est (aside from the grey on the inside of the gloves, anyway). I considered dying them Jet Black to match the boots, but I was afraid I wouldn’t like it in the end and didn’t want to blow the gil on one to test when I’m still getting money back from selling stock from Diabolos.

But, now that we got these, I’m really curious as to what we’ll get from FanFest for the glamour sets. It’s supposed to be one male set and one female set, and my money’s probably on FFX characters to go along with the FFX minions. I don’t know that I would do much with Yuna’s outfit, but I could see using Lulu or Rikku’s of the female characters. Getting Auron’s outfit for guys would be awesome, too, but I’d imagine if we do get a FFX outfit, it’ll be Tidus’s.