We’re approaching Patch 3.4 at full speed now—there’s just a week remaining! And as usual when we approach new Main Scenario Quests, I’m having misgivings about my current Ninja glamour (which is the one from the Fashion Ninjutsu’s inaugural post). I’ve talked before about why, so I won’t go into that again here. I do have a pretty solid fallback if worse comes to worse, but I wanted to at least try to find something new before 3.4. I was thinking back to an older look and decided to see if I could update it for Heavensward.

My intention was for this to be a new Glamour Spotlight, rather than a Looking Back post—the distinction probably only matters to me, but Glamour Spotlights are usually reserved for looks I actually intend to use. Unfortunately, I couldn’t settle on a finalized look, but before I get into why, here’s the full glamour itself (as usual, there are slight modifications to incorporate newer 3.0 items): 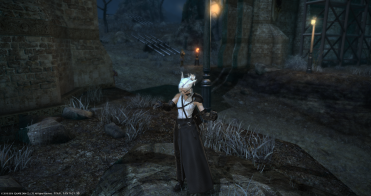 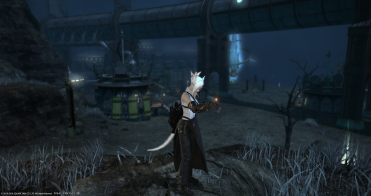 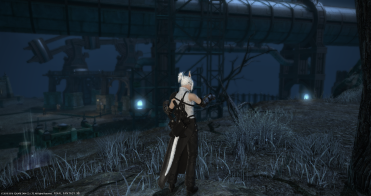 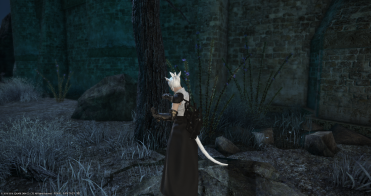 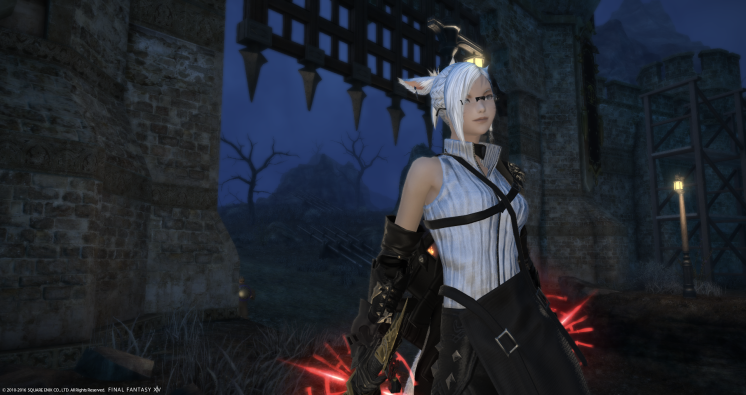 I’ve fond memories of this glamour, as it was what I wore for most of the time that I was with the static with whom I finally cleared Final Coil. (I was actually wearing a different glam the night we beat Bahamut, though…I went back and watched the cutscenes in the inn wearing this… >.>) But I’m not happy with the look now, and it comes down to one thing: the gloves/hands piece.

The Allagan Gauntlets have bits of gold on them, and nothing else in the outfit does. Back in 2.5, that wasn’t as much of an issue, because I was using Sasuke’s Blades, which also have gold (I took the final picture with them). But now, with those long retired, the gold stuck out like a sore thumb next to my Spurs of the Thorn Prince, and so I spent awhile last night and this afternoon trying to find another pair of gloves that would work.

I tried several things, from the low-level Goatskin Armguards to the Replica High Allagan Gauntlets of Striking (which dye much better than I anticipated, actually: I may end up using them soon in some fashion). Nothing really fit the look right, though. I’m not a fan of the single arm-brace on the Strife Vest: if both arms had one, I’d actually probably have found something. But I wanted to cover the brace since only one side has it, which really limited the gloves I could use, and ultimately, I threw the towel in on this one.

That being said, if I weren’t so opposed to glamouring over my relics, I’d probably have given this a whirl going into 3.4. I may yet experiment with some new things, but at the moment it looks like I’ll be running the Allagan Cuirass of Striking. However, I’m also not planning to do the MSQ on day one of the patch—my plan is to do a lot of crafting, so it’s possible I’ll have something new before I actually start doing cutscenes. We’ll see!