The pre-patch hype is building, and as usual, we’re starting to get previews of a lot of the new gear coming in 3.4. While I’m sure there will be a number of other surprises in the final patch, we’ve now gotten previews of the main gear for the new dungeons, the new crafted battle gear, the new gear from Tomestones of Scripture, and of course, the sets from Alexander (The Creator). As usual, there are some hits and some misses (for me anyway!), but overall I’m very excited for the new gear. 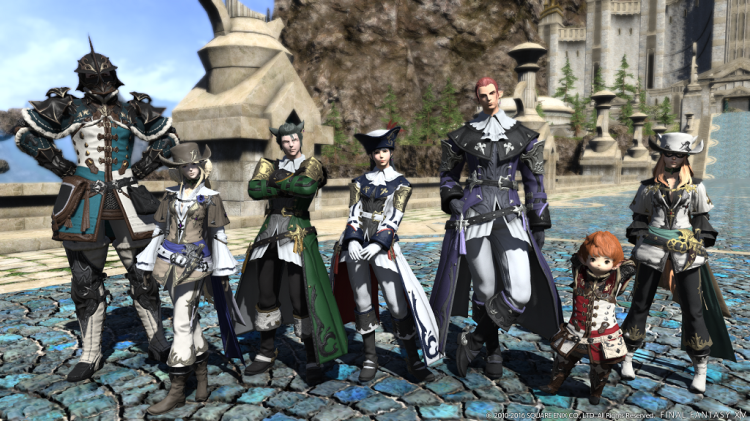 The dungeon gear from Xelphatol and Great Gubal Library (Hard) is, unfortunately, recolors of previous sets. They’re mostly drawn from the i185 sets from patch 3.1, but the left-most set and the second from the right are recolors of the Halonic physical DPS sets. While we should expect to get some recolors here and there (they were a regular fixture of ARR, too, which even had a dungeon set where we didn’t get new gear at all: they just moved the Mythology gear into dungeon drops via a token system), I’m a bit upset that these sets are so recent. I would, I think, preferred to have seen some recolors of the Valerian gear from Neverreap and Fractal Continuum, as those are some great models that unfortunately didn’t excite me color wise.

The positive takeaway from these sets seems to be that some of the models are going to classes who didn’t have access to them before. The three sets in the middle seem to be for Scouting, Aiming, and Striking (left to right, at least guessing from the Patch 3.4 trailer), and they’re recolors of the tank and Dragoon sets from Arboretum/Pharos (Hard). I’m not keen on the color schemes exactly if I have them pegged for the right classes, though I may use the white coat for Bard. Casters and Healers instead seem to be getting the recolors of the BRD/NIN/MNK sets from the same dungeons, which is nice, since they don’t often get gear in that kind of style (though I’m not sold on the color schemes here). Whichever of the other two sets is the tank one will also be new for them, but Dragoons are unfortunately getting stuck with a model they already had.

Thankfully, for the rest of the sets, we don’t have to guess as to who is getting what, since the previews all include weapons! 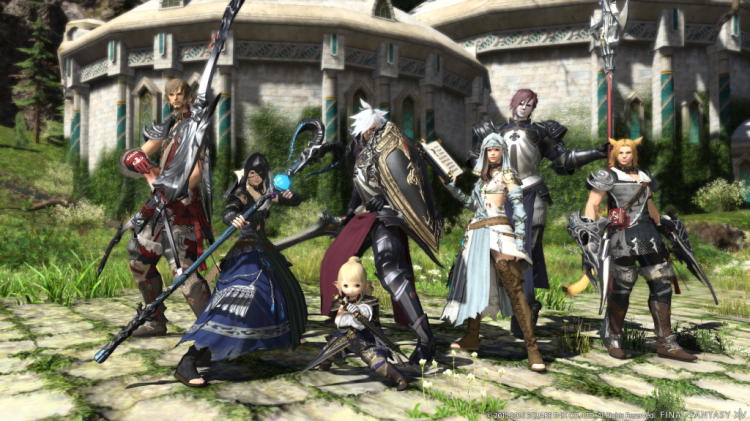 Of the new crafted gear above, I think I’m most excited for the Casting and Healing sets. They’ve got elbow gloves thighboots, and they overall give us something we don’t get much of in terms of style. These are a bit reminiscent of the Allied Seal gear from the Immortal Flames, with the separated skirt or the most recent Casting/Healing PvP sets, but there’s more of a “wild” feel here which is pretty neat.

I’m not particularly excited about the other sets—the Aiming, Scouting, and Striking sets don’t much strike my fancy, but it’s always possible there will be an element or two of them that dye well so I’m open to possibilities here. We don’t have the best view of the Fending and Maiming sets, so it’s a bit hard to judge them here. I could see using the tank body since it looks to be a bit on the “lighter” side and doesn’t have a huge coat or cape, but it’ll really come down to how it dyes, and armor almost never dyes well in the colors I prefer to use for my tank looks.

While I was initially excited for the new Scripture gear, after seeing the gear in the patch as a whole, I think several of these sets are a bit underwhelming. The stand out set for me is the Scouting one, which actually looks like it could practical for stealth missions, and it also gives NIN access to a set of elbow gloves, of which it has very few to choose from.

The tank set also looks like it could be nice, but I can’t imagine that it will dye well at all. The Aiming and Casting sets seem a bit simple to me (so I can understand why BRD/MCH/BLM/SMN mains might be a bit disappointed), though I do like the hat for Aiming and the boots there. The pose for the Casting set is kind of unfortunate, and it may actually look much better once we can actually see the front of it.

The weirdest set here is the Healing one, I think. The robe is basically the same sort of thing Healers always get, and I the hat makes me think more of a chef than a mage of some kind. There’s always one set it seems that’s just off (it ended up being the Dragoon one for the Lore gear for me personally—it looked great in the promotional stuff and just really awkward in the actual game).

That being said I do, overall, like the Scripture gear more than I liked the Lore stuff., as the Lore gear only had one set that really stood out for me (the Hellfire gear) in the end. 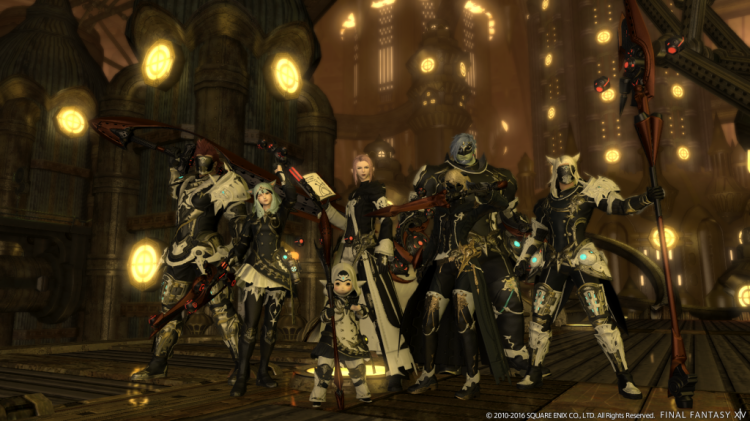 But even if I hated all of the new gear in 3.4, I would still overall be happy because look at this gear from Alexander. I’ve not been truly excited to get gear from one of FFXIV’s 8-man raids since Second Coil of Bahamut. I love this stuff! Black and white are, of course, the two colors I most prefer to glamour with, and these sets all have really striking looks.

They’re even mixing and matching who shares the models to a degree, something I wish the team would do more of. Though these guesses are always a little bit tricky when we can only see the gear from one angle, it looks like Aiming/Healing/Striking share and Casting shares a model with Scouting. That’s a bit different than what we’d normally get, where Healing and Casting would be together and Scouting would be with the other lightly-armored physical DPS. While I would have liked to see Aiming end up with Casting’s set instead (since I don’t care for coats and robes on Scouting gear so much), we’ve also not, to my recollection, seen Scouting and Caster ever share, so that’s something novel.

I’m very likely actually going to keep running normal mode Creator well beyond the point when I normally do, as I actively want pretty much all of these sets for glamour. Even the tank gear looks like something I can use, and it’s rare that I feel that way about a raid set. Since I’m probably going to want to dye lots of these (I bet the tank one looks awesome in Pure White!), I’m actually more motivated to raid than I’ve been in a long time. I don’t have a static, though, so whether or not I actually get that done within the patch cycle is another thing entirely!

But I actually want to, and given how apprehensive I am about raiding, I’d say the art team knocked it out of the park with the new sets.

We’ll probably get Preliminary Patch Notes on Friday, but I think rather than doing a post on both the Preliminary and Final Patch Notes, I’ll probably cover them entirely on Monday and (hopefully) have a new Ninja glamour on Friday. I’ve got a few ideas for one, though it looks like I might be stuck in Metallic Silver again, and I’d really rather prefer to be wearing Pure White for the 3.4 Main Scenario. We’ll see what I can figure out, though, and at least in 3.4, it looks like I’ll have the Scripture gear and Alexander gear, both of which should probably work pretty well in white!