I think, as we’re now in the last leg of Heavensward, I’m getting nostalgic for the early period of the expansion. I’ve started favoring gear again from 3.0, and while some of it’s probably just coincidence, I also found myself missing Ishgard last night. While I generally idle in Limsa Lominsa at the same spot I have since early 2.0, I intended to “move” to Ishgard in Heavensward, and I did for quite awhile.

Eventually I stopped idling there and found myself naturally gravitating back to my old haunting grounds, but after going there again, I also started thinking about my old Bard/Machinist glamour from 55-60. Machinist was (I think) the third class I got to 60 in Heavensward, and I spent a lot of time standing at that spot in the Orthodox Tunic of Aiming. I prefer it in many ways to the Dravanian equivalent, as it has darker colors, which tend to look better on Alahra (regardless of whether or not I have the pipe dream of her always wearing Pure White >.>).

But that nostalgia all happened after I got the Valkyrie’s Coat of Aiming. I put together a glamour for it quite easily. All of the pieces were easy to decide on, but the resulting look just didn’t excite me. It didn’t make me want to play Bard or Machinist, and the coat itself just didn’t seem to really fit with all of the jumping animations that the two classes have, either. But I really needed a new glamour for them, as I hate leaving my jobs in un-glamoured gear (and I don’t care much at all for the crafted Aiming gear I have now).

So the trip down nostalgia lane got me to pull out the Orthodox Tunic. We’ve gotten some new gear to play with since I last wore it, so the resulting glamour is somewhat different than what I wore back then. 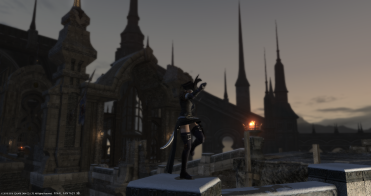 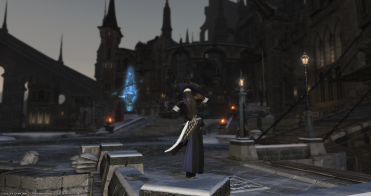 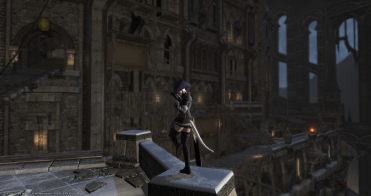 Naturally, this looks shares some things in common with my last Bard/Machinist glamour. The basic idea is the same, but the colors are different, which opens up the need for a few differences. The Brand-new Gloves are a pretty natural fit with the Tunic’s colors, and I much prefer the Orthodox Tricorne to the Dravanian one, so I’m using it instead of the Augmented Choral Chapeau.

When I was using the Tunic originally, I used the Orthodox Thighboots, too, but I felt like they didn’t quite gel with the Brand-new Gloves since they’re almost entirely brown. While the Tunic does have that leather bit on the shoulder, it’s not really prominent, and with the Gloves doubling down on black and purple, I needed something different. I wanted to go with the Griffin Leather Thighboots of Aiming, but I couldn’t find a satisfying dye for them, and the Bogatyr’s Thighboots were simply too black given everything else For now, the Expeditioner’s Thighboots work well enough, but I’m on the hunt for a different pair.

I’m really hopeful we get dyeable versions of the Tunic in Stormblood (much as we got dyeable versions of several ARR dungeon sets in Heavensward), as I know I could do a lot more with it if I could get one in different colors. I’d love to use it for Ninja, too, but I’m not a huge fan of the colors for the two versions it has at present. Until then, though, it’s kind of nice to revisit what is undoubtedly my favorite Aiming body from the expansion.