I’m not really sure why it always seems to happen this way, but my glamours for Bard and Machinist are often affected by drops from dungeons and the like. It’s pretty rare that I use Tomestone or other currency gear for them, with the lion’s share centering around new dungeon drops. Maybe it’s just luck of the draw, where I end up liking the Aiming gear from dungeons and 24-mans more often than I do for other sets. In another instance of this long running pattern, I got a drop for Bard/Machinist that I’ve been after in a really passive sense for a couple years now, the Ballad Crown.

Since I’ve never played Bard (or, post-Heavensward, Machinist) in a really serious sense, it’s been rare that I rarely focused on getting this, as it wasn’t crucial. Bard already has a lot of great hat options, from the Choral Chapeau to the Orthodox and Dravanian Tricornes, so I wasn’t really hurting to get the Crown from Labyrinth of the Ancients. Lately, as I’ve been doing the Crystal Tower weekly for Aether Oils again, though, I’d been thinking about it more. Last week when I went to LotA, I saw it drop, but I was on Paladin at the time and I rolled horrendously low on Greed. Just in case, when I ran the raid yesterday for the new weekly, I decided to go on Bard, and in a rare alignment of luck, it dropped again, and I beat out the Machinist in the group with a fairly safe roll of an 82.

I’ve had the basics of the resulting glamour in mind since early 2.4, and it felt really good to put it together finally. Since I had already put together a Monk glamour prior to getting the Crown, I left it up to a Twitter poll to determine which one I should post first, and Bard/Machinist one with a pretty good margin, so here we are! That’s actually probably a good thing, because I feel like the Monk one might need a little more work. Expect it on Friday, assuming I’m satisfied with it by then! 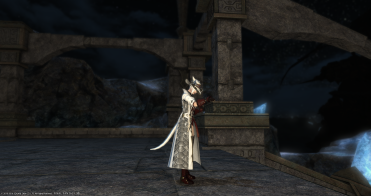 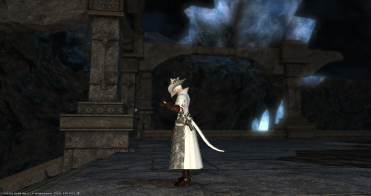 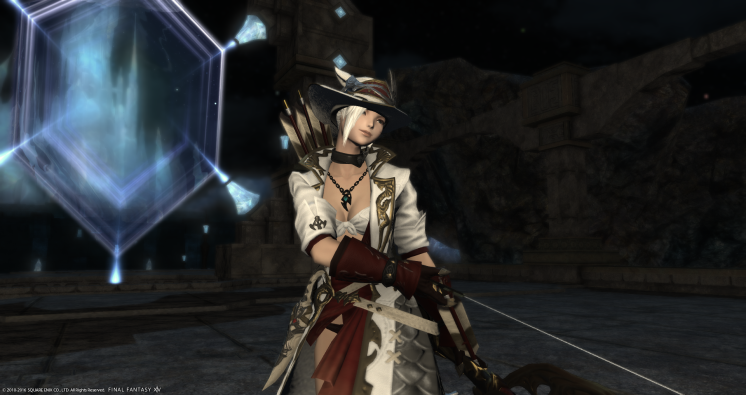 With the gold pattern on the hat, the Ballad Crown is a natural fit for the similar embroidery on the Kirimu Coat, which is what has made me want it for so long—just not enough to specifically seek it out. I saw the combo ages ago during 2.4 and made a mental note to play around with it, and it’s taken me about two years to actually do so! I considered using the newer Uraeus variant of the coat instead, but the extra black on it seemed a bit out of place here, so I stuck with the original.

Of course, the overall look is my “default” for Bard/Machinist (which has shown up in other styles on this blog before), but I got to play with some new elements. In the past, I’ve just about always used the Bogatyr’s Gloves and Thighboots with the Coat, but with the hat being white, I didn’t want to use black for the hands and feet pieces. I started out working with elbow gloves instead, but couldn’t find a pair that I liked. As it turns out, the Griffin Leather Gloves dye very nicely for the look, since they keep the gold finger-tips, which key off of the gold on the coat and the hat well. The Griffin Leather Thighboots, though, don’t dye anywhere near as nicely. That’s where the Eikon Leather boots came into play, instead: they have gold accents, too, which results in an overall rather cohesive look.

So that’s that! As I wrap this up, I’ve already thought of another body piece that might go well with the Ballad Crown, so I wouldn’t be surprised if I get more use out of it in the future, as with any of the game’s better looking hats. Good headpieces are a rarity in FFXIV (at least, for my tastes), so I have to savor the ones I get my hands on!