Sometimes, Palace of the Dead gets me into trouble. Since you can where gear of any sort inside without it impacting your stats, I often mess around with things I wouldn’t normally glamour just for fun when I run it. Lately on the weekends I’ve been running it a lot (and I have to say, the various improvements to PotD in general that came with 3.45 have been very welcome), and I’ve been experimenting with Paladin in a duo setting, too. Mostly for kicks, I did several runs over the weekend in the Light Steel Galerus and Subligar and after a few hours of that, I had to admit the look was growing on me.

Once we finished up our runs on Saturday, I decided to mess around with glamour options, and I’ve got a look I rather like for Paladin (though I don’t think it works as well for Dark Knight and Warrior—I think the Shield makes all the difference, creating something like an admittedly over-the-top gladiator look). 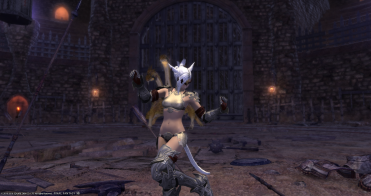 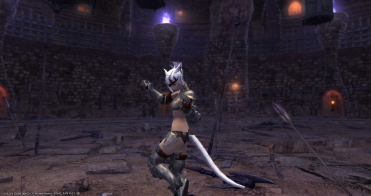 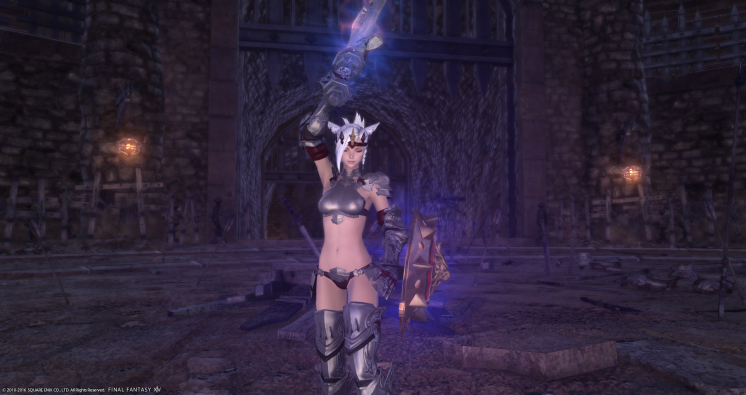 I originally set out to go for a blue, gold, and silver theme to line up with the Curtana/Holy Shield Nexus models. With the Galerus and Subligar in Royal Blue to match the hilt of Curtana, I wanted gold and silver for the gauntlets and sabatons or boots, but I quickly hit a pretty big wall there. There actually aren’t a lot of options in that department, which surprised me. The Heavy Allagan Flanchard has the right color scheme when dyed silver, as do the Replica High Allagan Gauntlets, but were a bit too bulky looking and felt out of place. The High Mythrite pieces almost worked, too, but the silver dye didn’t really match up well with the Galerus, and I couldn’t settle on a shade of grey that worked either.

As a sort of compromise, I pulled out the old Burtgang/Noct Hoplon standby: I wanted something that glowed for the time being, since everything is more fun when your armaments are glowsticks. With the red on them, the Dravanian set was the natural go-to, and I knew they would work well with the Galerus since I had, as a joke, used the Orthodox equivalents quite some time ago for a similar look. The Hoplon in particular is great since it calls to mind Greek hoplites which, at least in pop culture, are often depicted as lightly-armored (even if historically that wasn’t really the case).

It’s funny, though, because I think what’s holding the look together for me right now is the Coronet. It feels like it’s serving as a bit of a capstone for the whole thing: without it (such as when I swap to DRK or WAR), something crucial seems to be missing, and I couldn’t find a circlet that really clicked with everything for those two. I considered the Replica High Allagan Circlet, but I don’t like the way it sits over the left eye.

I may yet find something else to make this a full on tank glamour, though, rather than a Paladin-specific one, especially if I can figure out a better pair of options for the hands and feet, to get back to the blue central color that I wanted to use originally. I could see the dyeable Midan ones working out, but I’d have to farm them from Midas (Savage), and that’s not a particularly attractive prospect.

But there’s always the chance there’s something that I’m not considering, so I’ve got to keep my eyes open!