If there’s been a general trend in the glamours I’ve showcased this last month, it’s that most of them have been very “lightweight,” from the caster glamour that seems to have started it all to the admittedly skimpy tank glamour that I’m still running around with somehow. Against this general backdrop, my last Ninja glamour started to bother me. While there’s nothing wrong with it in particular, the overall look felt really bulky—the Iga Ningi in particular seemed out of place. And, well…once the itch is there, I have to figure out something new, especially since Ninja’s my main (though admittedly I play Black Mage more right now). 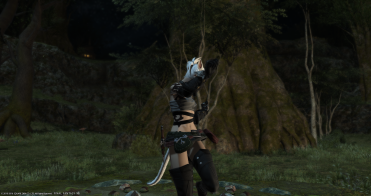 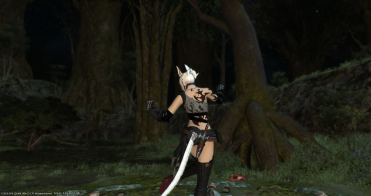 Something about the aforementioned tank glamour is still really sticking with me, so my first thought has been to aim for something with a similar profile. Naturally, I didn’t want to use the Light Steel Galerus, since the result would more or less be the same glamour (though I did experiment with it a little bit just in case). The nearest alternative in terms “coverage” (for lack of a better word) is the Arachne Shirt, and once I got it out, I liked how the red pouches matched the red soles on the Highboots, so I decided to fiddle around with it.

I don’t think I’ve used it in Jet Black before, and that was the natural choice given the Highboots, too. From there, I intended to use the Gryphonskin Pantalettes—they follow the same dyeing pattern that the Shirt does, so that made things really easy to match. After running around with them for a bit, I wasn’t happy, though. My guess is they weren’t slim enough alongside the Shirt. Once I put the standby Subligar on, things clicked better, and so I stuck with that.

While the Arachne Field Dressing are a natural complement to the Shirt, I wanted something at least a little heavier, since the rest of the look was so light. I’ve always liked the Halonic Vicar’s Gloves, and I’d been using them for another glamour I was testing out already, so when I swapped back to the shirt, I found that I still liked them generally. They’re neutral enough to work with most anything, and they’re black and grey like the Shirt is.

The glasses…well, I don’t have a good reason for those. I was going to use the Scintillant Circlet as I had been doing lately, but something about it didn’t seem to gel right. The glasses clicked in a way that doesn’t really make sense, given the overall style of the look, but I was happy with it, and that’s what matters in the end.

However, I suspect this will end up being one of those periods where I mess with Ninja glamours for a couple weeks straight before I arrive at something I’m truly satisfied with. There’s a look I definitely want to perfect with the Shire Emissary’s Jacket, but I need the dyeable version to do it, so that’s probably off of the table for now since I won’t have that until mid-January when 3.5 comes out. I’ve been pondering other light body pieces for Ninja but at least as of writing I don’t have anything else in mind to try. I’m sure something will come along, though. It always does.