Early last week when I debuted my new Paladin glamour, I mentioned that my original plan was to work around the Curtana/Holy Shield Nexus but that I had trouble getting the look I wanted. As it turns out, I shouldn’t had trouble at all: I just was stuck on the wrong overall color for the hand and leg pieces. That glamour ended up largely silver, with bits of red keyed off of the accents on the Dravanian Gauntlets and Greaves. More or less, that was the same look I was trying to create to work alongside Curtana, but with blue instead of red—the problem was that there weren’t any pieces that had an amount of blue similar to the amount of red on the Dravanian stuff. The Creed pieces come close enough, but they don’t match the Galerus very well, and when dyed, they lose the blue they have (the blue is also darker than the blue on the Curtana, either way).

The trick, as it turns out, was to drop the insistence on silver/steel to begin with, especially since the Light Steel pieces aren’t a particularly match-able shade of metal. Once that hit me, I moved over to the Valor Gauntlets and Sollerets, which naturally pair with Curtana. I would have stuck with them, too, but the Sollerets in particular were just too…plodding for the very slimmed down look everything else had. From there, I went back to the High Mythrite pieces—I had tried them before, in silver, but couldn’t match the shade properly. It turns out, though, that they work pretty well in blue. 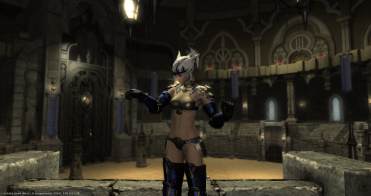 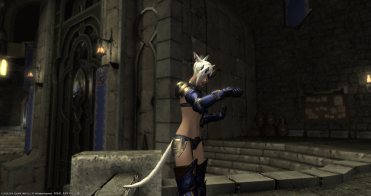 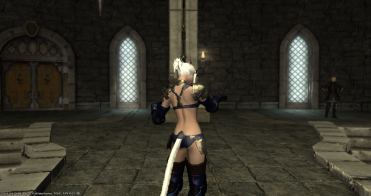 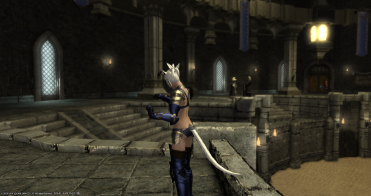 I shied away from going all Royal Blue mainly because going all in for a particular color often feels a bit artificial to me (outside of everything being Jet Black, I suppose). I hate those mental hangups sometimes, because they make me forget obvious solutions to glamour troubles I’m having. In fact, two of the other tank glamours I’ve had in recent memory that I paired the Curtana with have been fully Royal Blue, so the thought really should have occurred to me to begin with.

Otherwise though, the overall look is still really working for me, at least for Paladin. At least until I have the Sharpened Sword of the Twin Thegns, I’m probably going to be sticking with Royal Blue for my tank glamours, so that I can continue to use Curtana. Despite Excalibur being the one with the longer history in Final Fantasy, model wise I vastly prefer the shape and style of the Relic to Paladin’s Zodiac. It’s going to be awhile before I have the Paladin 260 Anima, though. I still have to go through the daunting Umbrite grind for it since I’m only on the Hyperconductive stage, and my Sharpened Word of the Magnate is going to come first for now.

I can’t see my tank glamour really changing in the near term either—tank is always the last role that I gear each raid tier, and it’s actually going to be 4th this time instead of the usual 3rd after Scholar/healer, since I took a very fun detour and have been gearing Black Mage as a secondary DPS class. But you never know! Maybe I’ll find my sense of shame again and need to put some clothing back on Alahra.