Since I’m largely stuck waiting on 3.5 to put together a Ninja glamour around the Augmented Shire Emissary’s Jacket, I spent the weekend trying to come up with something to tide me over until then. As I mentioned last time, I didn’t have much luck then. After that post and some Roulettes, I started messing around again (which means I’m really neglecting FFXV, but that’s neither here nor there I suppose). I started out wanting to do something with the Yafaemi Gloves of Scouting. They’ve got a really nice style, in addition to being elbow length, and I thought they’d result in a unique look.

Finding body pieces to go along with them proved pretty tricky. They don’t look too bad alongside the Arachne Shirt of Scouting that I was already wearing, but I wanted something different. It felt like the key was to find something with silver that matched the accents on the gloves, but whatever it is couldn’t have long sleeves, since the gloves have gaps in them. That ruled out otherwise suitable tops like the Augmented Ninja Chainmail (for me, anyway, I couldn’t get past the problem of the chainmail sleeves “disappearing”).

Awhile later I found the Chivalric Coat of Scouting. I’d never really given it much thought before, as I always thought it seemed really out of place for Ninja given how much motion’s involved in the job’s attack animations. It does have silver embroidery, though, and the sleeves are short enough that I thought it would work well with the Yafaemi Gloves. I didn’t like the resulting look, since the brown on the gloves is a bit hard to match, and doesn’t quite jive with the black and blue on the coat that stick around when you dye it.

From there, for some reason, I bought a Jet Black Dye off the Market Board to see what the coat looked like (I don’t really like relying on the preview window, since the lightning in it doesn’t match up with most situational lighting in the game itself). Once I had dropped the gil on that, though, I felt like I had to use the coat, at least for a little while. I wanted to shoot for something similar to this old Scholar glamour, but Ninja doesn’t have a good analogue to the High Allagan Pantaloons of Healing, so instead I ended sticking with the normal style I use for the Kirimu Coat. 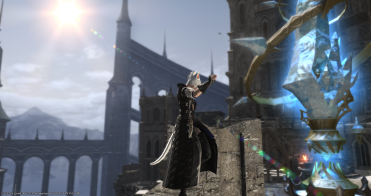 Honestly, after having run around in it for awhile, I think the Chivalric Coat of Scouting is my favorite version of that model now. I like the blue accents, and I much prefer the black sash at the waist to the red one that’s on most other versions. Silver is also much preferable to the gold that’s on the other ones. There’s just enough red on the coat to make Y’shtola’s boots the premier choice, which is nice since they are (obviously, by now) my favorite thighboots (I’d love if the red part was dyeable—then they’d work with basically everything >.>).

The trickiest part here actually proved to be the gloves once I got started. Ninja doesn’t have access to the same variety of nice gloves that Bards and Healers/Casters do, so I struggled to find something fitting. The standard Replica Allagan Gauntlets didn’t work since their metal bits are gold rather than silver, and Ninja doesn’t have access to any variety of the Bogatyr’s Gloves, which would have been my first choice here. I considered the Augmented Ironworks Vambraces, but they don’t play well with dye at all. The only gloves that worked alongside the Coat were the corresponding Griffin Leather Bracers, which I actually like much better than the Kirimu Bracers.

Like the Ninja glamour before this one, though, I can’t imagine this look will last for any significant length of time. While the coat looks great standing still, once Ninja gets into combat it still feels somewhat out of place for me—but Ninja’s the only one that can use this version of it, and since I now prefer it to all the others, I might as well use it until I can’t take it anymore!