As of yesterday, I finally got the alt I’d been occasionally writing about to level 50, and that means she’s now able to have her own glamours officially. Of course, she doesn’t have a wide range of classes to glamour for (and probably never will), but I still need to glamour what she does have. Dragoon is Lynahra’s first 50, and I’ve had a basic glamour goal in mind for that since I switched her to Lancer from Marauder. Unfortunately, she does not yet have the Battle Stance and Victory Pose emotes, so she has to stick to the boring alternate combat stance for the main shot. 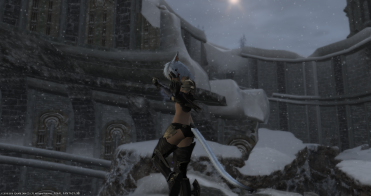 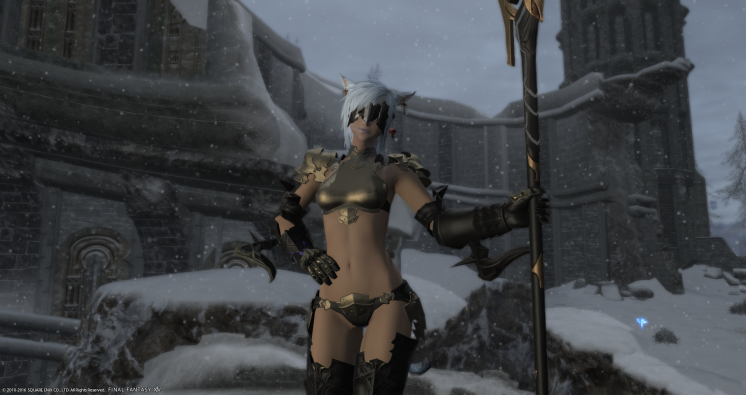 There are some obvious similarities between this glamour and Alahra’s current Dragoon and Paladin glamours. Obviously, I can find excuses to use the Light Steel Subligar all the time, but until that tank glamour for Alahra, I’ve very rarely used it alongside the companion Galerus. I had the idea for this one before I put together that Tank glamour, but Lynahra was still a ways off from 50, and I didn’t want to just exactly copy the Dragoon one (other than the color). So, I went ahead with it anyway.

Depending on how much I play Lynahra in the long term (the current plan is to duo or trio the MSQ through the end of ARR with my S.O.), I may have another Dragoon glamour for her soon. I’d like to mess around with the other Allagan pieces to some degree, and just in general, I want her to be at least somewhat distinct from her sister. For now, though, this should last me long enough to get Dragoon through 2.55 stuff, at which point she’ll be switching to a Dark Knight, most likely full time, as that’s the whole reason I started taking her up in the first place.

On the Alahra side of things, since I recently finished her Sharpened Word of the Magnate, I’m shopping around for a new Healer or Scholar glamour. I’ve got one I’m using built around the Augmented Scholar’s Gown, but I’m not entirely happy with it. The Gown seems to fit her original hairstyle better than the Minfillia hair, so I may spend some time this weekend working something out for Monday.