I can’t honestly remember what prompted me to level Black Mage past 50. It’s never been a great fit for Alahra in a canonical, role-playing sense, but I suppose in the end I like leveling too much to really leave things be. I remember starting off from 50 with the Augmented Ironworks Doublet of Casting (and some other stuff I don’t quite remember right now), but it wasn’t long before I wanted something new. I used something similar to this while leveling Summoner/Scholar, but it wasn’t until I came back around to caster gear in 3.1 for Black Mage that this look came together. 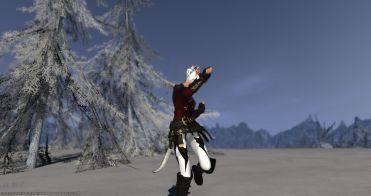 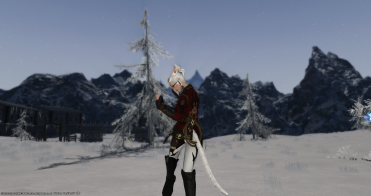 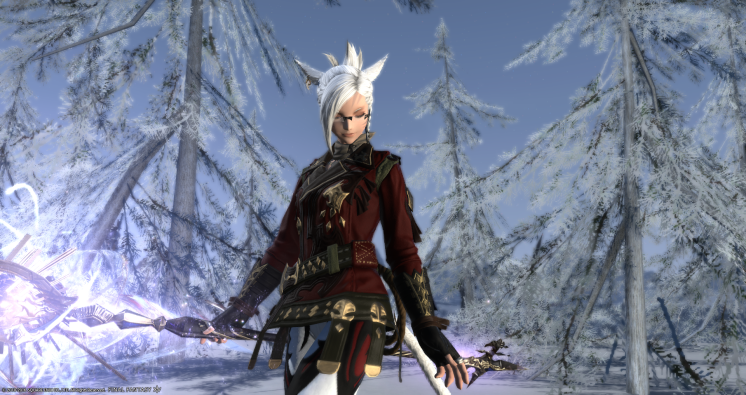 I started using the Jackcoat and Breeches relatively early in the 51-60 stretch, and the core of the look lasted all the way through to 60. At first, I was using the standard Bogatyr’s Gloves and Thighboots of Casting, which was the reason for the Wine Red coloring (and the reason for the Darklight Breeches, for that matter). For most of the other classes from 50-60, I had three or four glamours as I played around with new gear—Black Mage was the only one that I managed to have a consistent glamour pretty much all the way, with only the accent pieces changing. It wasn’t until 57 that the look really came together, though: the Halonic Gloves and Thighboots simply clicked with the Jackcoat, and from there I couldn’t look back.

Of course, this look’s a bit unique among mine in that it’s a glamour without thighboots (well, not really—even if the Halonic boots are called that, they’re more knee-length) and also pants. It also does something I rarely do, which is dye a key component (in this case, the Breeches) a color that’s in stark contrast to the rest of the set. Normally, the Breeches would have been Jet Black for this, most likely, but there was something about the Pure White that just worked.

If I weren’t so satisfied with my current caster glamour I’d consider going back to this one for awhile, to be honest, but six weeks out and I still haven’t felt the need to really change.