I mentioned in the post on my last healer glamour that I had gone back to an older one for Scholar at first, and since we’re in the end-of-the-patch lull where there’s not for me to do glamour-wise until we have some new gear, I might as well show that one off. As I said then, the centerpiece of this one is the Augmented Scholar’s Gown, which is a piece that I once loved, but no longer excites me. I can’t quite pinpoint why—the best I can figure, it’s just that it feels very much like period wear. More than anything, I associate the Scholar Artifact set with early 2.0, I suppose, since it was my first level 50 job, and so going back to it now after so long makes it feel dated. 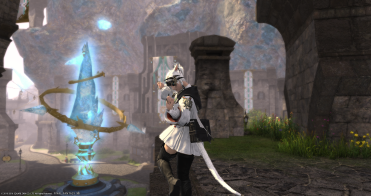 I can’t for the life of me remember which leg piece I actually used back in 2.5—I suppose the most reasonable guess would be the Light Steel Subligar, but for some reason I’m not entirely positive that was the case. Overall I think the Knickers are a better fit here, though, and they’re what I pulled out when I went to recreate this look last week.

I’m not convinced I would still use the Ironworks Thighboots if I were to go back to this in an official sense, either. I’ve included them here since they were in fact what I used back then, but like the Scholar’s Gown, there’s something about them that just seems old to me. Even so, the Expeditioner’s Thighboots don’t seem to really fit (though the sheathe on the knife actually does key off the hardly visible bits of orange on the Gown), and the Scion Healer’s Highboots have red soles, which don’t work so well with the body (since it two-tones with pink when you dye it red). The Adept’s Thighboots are a bit too narrow for the Gown, and other than those three, there aren’t many that come close to the right style.

So since this look never really clicked, I went with the other glamour I showed off last week. I still like this one enough to preserve it in a historical sense, though, I suppose.

One thought on “Glamour Spotlight: Scholar #2 (Looking Back)”