It actually took a lot longer than I thought it would, but a couple nights ago, the Chivalric Coat from my previous Ninja glamour finally started to get to me. I don’t normally like long things for Ninja since they feel awkward with many of the animations, but the Coat does look really good, so it took awhile for me to grow tired of the overall look. So, while I think I might come back to it some day, I needed to move to something different. I’m still largely stuck on black with red bits because I can’t seem to tear myself away from the Scion Healer’s Highboots, and that lead me back to an old 2.x standby. 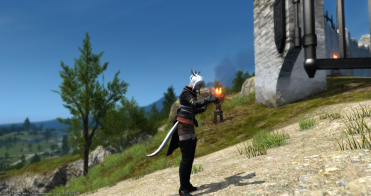 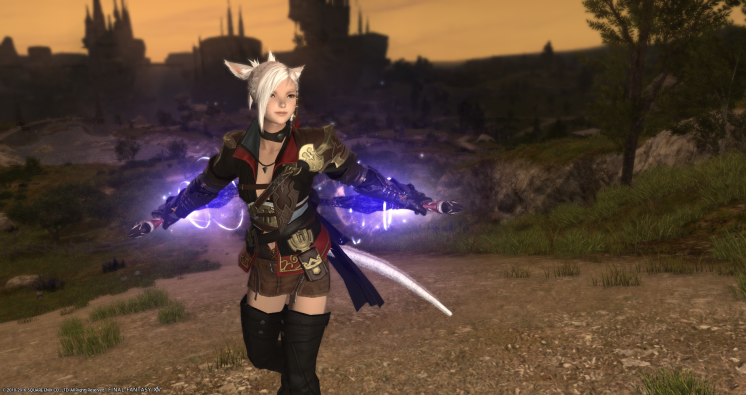 Of course, I’ve used the Saurian Shirt before, in what is still probably my favorite glamour from ARR. This look is fairly similar, of course, since I went with the same gauntlets. But since I wanted to stick with the Highboots, I didn’t feel that the Picaroon’s Trousers really worked. The end result is actually a return to one of my very first Monk glamours, from 2.2 or so, as well. The boots were different then: I stuck with the Saurian Boots that go with the shirt back then, and they worked well enough, but the Highboots work better.

All the standard notes are here, the elbow gloves, the skirt, thighboots, even the new Circlet that I can’t seem to get enough of. While there’s nothing particularly new here, I’m enjoying going back to this particular body and legs combo—I’d never used it on NIN before. It’s sort of interesting to me though, that this look doesn’t strike me as “out of time” the way the Scholar AF does (which I talked about a bit on Wednesday), since it’s honestly not all that much older than it.

We’re just a few weeks away from 3.5 and new gear. I’m not sure yet whether I’ll be keeping this look for the Main Scenario or not, and since I often end up changing before a major patch anyway, I suspect I’ll have another Ninja glamour within the next couple weeks. We’ll see, though—for now, this is doing the trick!