Sometimes, a piece comes along that I like but I have trouble using. Often, this is because I can’t find the right things in combination with it, and with gear additions being on something of a schedule, it can sometimes take a months or a year before I get around to making a glamour around something that I’ve meant to make a centerpiece for ages. The piece in question for today’s spotlight, the Coat of the Lost Thief, is over a year old now, and I’ve been meaning to do something with it the entire time. 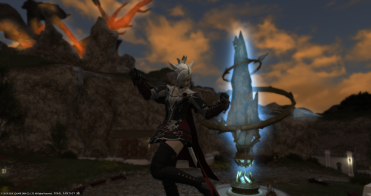 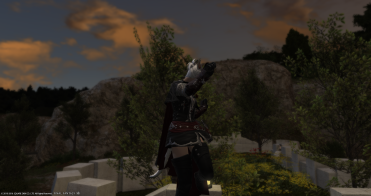 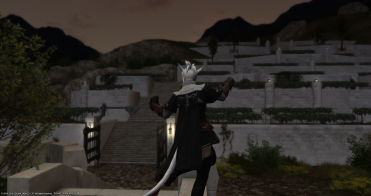 The tricky part of using the Coat for me was always the boots. The most palatable option, the Expeditioner’s Thighboots, just didn’t work with it for me, which more or less meant that while I tried to use the body piece a few times, I never put something together that worked for me. Why it took so long for me to consider using Y’shtola’s boots with it is beyond me: I should have put this together months ago now! But now that we have them, the rest more or less fell together without issue.

All of this is another “standard” glamour, as the Coat falls into a fairly common body piece type with enough length to work alongside the Lady’s Knickers but puffy sleeves that require elbow gloves of some kind. The only tricky part after the boots was the gloves. I settled on the Allagan ones because of the mix of black, red, and silver, which works well with all of that on the coat itself. While the grey on them is somewhat regrettable, in a rare twist, the cape on the Coat obscures it enough that I’m not particularly bothered by it.

Since this glamour is fairly “run-of-the-mill” for me, I imagine I’ll be playing around with other options for Ranged DPS soon enough, but I wanted to put this one out there in part just because I finally got around to using this body piece. It’s the only one of this model I really like, as I’m not fond of the colors on the other versions, so it was notable that I finally got somewhere with it.

One quick thing though: we really need some new thighboots! Even I’m getting tired of using the Scion Healer’s Highboots on just about everything!