Updates to my healer glamours are becoming less and less frequent as Heavensward rolls on. Despite my having a lot of loyalty to Scholar as Alahra’s secondary job, the overall trend in most non-raid content toward little need for dedicated healing honestly makes me enjoy the job much less than I used to, as I don’t find Scholar’s DPS playstyle engaging at all. Coupled with the fact that, in the grand scheme of things, Scholar’s gameplay is mostly the same as it was at 50, there’s been very little that’s kept me excited to play the job. I’ve had some fun with White Mage and Astrologian, as curiosities, but I’m still most comfortable with Scholar’s overall healing kit.

That’s meant I sat on my last healer glamour for ages, and in that time I think I healed perhaps three or four dungeon runs and one run as healer in the Deep Dungeon as an experiment for a duo. I decided to mess around with the Storm Lieutenant’s Jacket that I had been using for healer on my crafters (though I’m not sold on it yet), and to avoid using the same body on both, I went back to an old standby for healers. 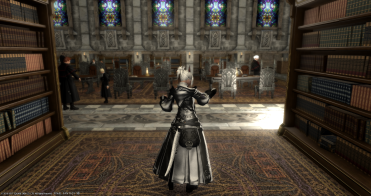 This is actually something of a throwback glamour. Back in ARR, I used this robe and its variations quite often for Scholar, and the Direwolf model in particular served as my very first relic-centered look, for the Omnilex Nexus. Most of the pieces I paired with it now weren’t available back then of course, but the robe is so dominant that the glamour was more or less the same.

But I’ve always had one complaint about the robe (you guessed it!), the sleeves. While the sleeves here don’t greatly bother me, I’d still prefer for something a bit more narrow to fit Alahra’s profile. As a result, I’ve resisted posting this one for about a week now, as I really wanted to find a pair of elbow-length gloves that would work here to take care of that minor complaint. The trouble though is that the robe’s profile is kind of wide, which makes most elbow gloves not really work with it. The best pair I found were the Star Velvet Long Gloves, but since they’re cloth rather than leather, they didn’t really jive with the other pieces outside of the profile.

With no new gear really on the horizon for the rest of Heavensward (barring what I imagine will be a few random glamour items in 3.55 for crafters), I don’t think any new gloves will be forthcoming, which means that the Brand-new Gloves (or any number of the other versions of the same model) are still the most natural pairing for the robe.

I’ve also gone to a throwback glamour for Bard and Machinist which has been alluded to briefly on the blog before, but I’ve never given it a full spotlight, so that will probably be the next item on the list for Friday. But that also depends on whether or not I settle on my new Ninja glamour by then, too. So we’ll see!