I’m really glad the amount of Wolf Marks rewarded in PvP was increased with Patch 3.5. I’ve had my eye on a lot of various pieces of PvP gear for glamour possibilities for a long time, but with Frontlines queues frequently being longer than 30 minutes and most of the rewards I was interested in requiring a large number of runs to acquire, it was often very difficult to find the motivation to go farm them.

The latest patch has changed those dynamics a lot, though. With the Garo rewards (many of which are also nice and will undoubtedly show up on the blog sooner or later), the ability to queue as a “freelancer,” cost reductions, and a near doubling of Wolf Mark acquisition, I can casually work toward glamour stuff just through a Frontlines Roulette every day. I’ve been working on collecting the female healer set from the Garo collaboration, but I also remembered there was a piece for Bard and Machinist I had hoped to get before my love affair with the Feast tapered out that I never did acquire, the Oschon’s Mail of Aiming.

Since I had been in a transitional period for my ranged DPS glamour, I decided to divert from the Garo gear for a day and pick that up. 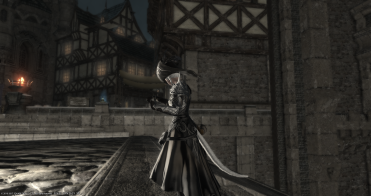 Ultimately, I probably won’t hang onto this one for too long. I wanted to use the body piece but had other things to do, so I went with something simple that I knew would work for the time being. Once I had the Mail and the Gauntlets on, I didn’t think the Augmented Choral Chapeau (which is what I had on prior to this look) really worked with the look. I didn’t like the look without a hat of some kind either, though, and so I pulled out the Tricorne. The leg and feet pieces are pretty much my default Ranged DPS stuff, of course, so there’s not a lot to say there. I did deliberately stick with the Bogatyr’s boots instead of the Ochon’s Sollerets, though, as I thought the shinier black on the former were a better match for the metallic black off-color that comes with Metallic Silver.

I have a feeling I can do more with the Mail, though. It actually has a really nice “woodsy” default color scheme that will probably pair well with some other Aiming gear once I decide to sit down and really put some time into it. Of course, my next goal for Garo gear is the BRD/MCH stuff (though I still have two pieces to get for healers first), so my next Ranged glamour may end up centering around some of that instead. We’ll see, though!