I went into this morning with no idea what I was going to post today. My plan had been to put together a new caster glamour over the weekend, and while I did try a few things out, nothing really stuck in a way that satisfied me. I have a look I’m working on for Black Mage still, but I think it’s going to require the dyeable version of the Shire Philosopher’s Coat to pull off in a way that’s satisfying, so that’s on hold until later. I might go ahead and upgrade that coat this week with my Mhachi currency, but I still have pieces I want to upgrade for Ninja, so I’m not committed to doing that just yet.

As usual when I don’t have a post planned, I started browsing through my retainers for reminders of older glamours to post. I came across the Halonic Vicar’s Cuirass and remembered being quite fond of it while leveling Ninja through Heavensward. I never really took the time to create a glamour around it, as I was quite close to 60 by the time I got it and wanted to focus on getting there. Since I have a secondary Ninja glamour I can work with now, I decided to go ahead and play around with it. 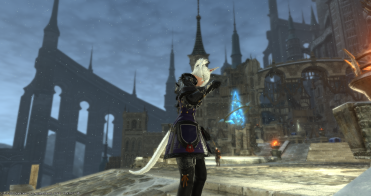 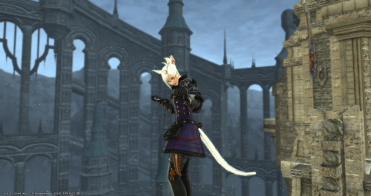 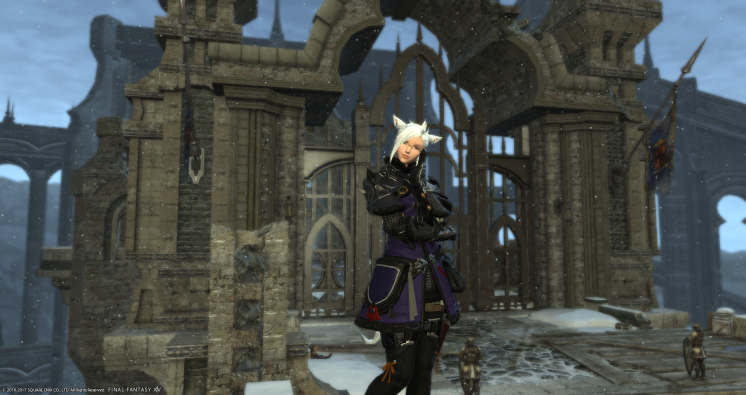 The Vicar’s Cuirass is one of the rare few pieces of sort of “heavy” chainmail for Ninja, and I’ve actually always had a bit of a soft spot for the look. In FFXI, Ninjas had access to a few hauberk-style body pieces that fit them well because they were often used as tanks, but there’s been comparatively little in the way of similar pieces in FFXIV that they have access to. Of the pieces we do have, some are simply too heavy (with the Althyk’s PvP gear being a prime example), and others tend to not really have much of a chainmail vibe (such as the Allagan Cuirass of Striking). The Vicar’s Cuirass is a nice middle ground: it’s heavier, making it suitable for melee combat, but a large portion of it is dominated by cloth/leather pieces, with just hints of chainmail.

On top of that, it’s purple, which is the current color of choice for my Ninja glamours where I can find something satisfying. The rest of the pieces fell in more or less naturally: the Vicar’s Gloves are an old favorite and I couldn’t find any good reason not to use them alongside the Cuirass. The Thighboots were the standard here, though I don’t think they’re perfect. They’re just the best of what’s available to go alongside the Cuirass (the Vicar’s Jackboots are mysteriously a different shade of grey from the Gloves, which honestly makes them look out of place in their own set to me).

I went with the Ninja Hakama as opposed to the Lady’s Knickers mainly to provide a bit more “coverage,” since the Cuirass is a rather protective piece. The Cuirass is also long enough to satisfyingly obscure the loincloth on the Hakama but not so long in the front that it hides the best part of them: that little knife belt on the thigh. With the gold bits on the Cuirass, I was also able to use the same glasses that I’m using on my main Ninja glamour, too, which makes this a bit of an improvement over my last alternate glamour.

As I’ve been writing this, I got an idea for a Machinist glamour, and I may very well have a caster one coming up soon, too, so that probably sets up the rest of the week’s posts fairly easily. Until Wednesday, everybody!