I’m in Chicago to attend a stop there on a book tour for Universal Harvester, but thanks to the magic of the internet, I can still show off my other ranged DPS glamour on the normal schedule. I said last time that I had a job-specific glamour to share today. Since I already more or less did the usual introduction in that post, I’ll dispense with some of the formality and get right into the pretty pictures. 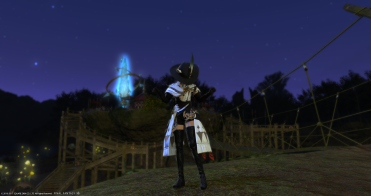 As I said last time, Bard and Machinist don’t actually have many suitable body pieces for black-and-white looks, but at the same time the Aoidos’ Cloak is probably one of my favorite body pieces for just that. The Cloak honestly looks good in just about every color, largely owing to the fact that it’s set up to dye mostly in a single primary color (the channels that use the grey off-tone are very small on this piece, so they don’t stand out).

Once I had decided to use it again, I realized I didn’t want to go too deep into job-specific territory, as I honestly play Machinist more than Bard. That meant not using the Aoidos’ Shoulder Gloves as I did the last time I made a glamour with the body piece. The Cloak definitely demands long gloves, though, which locked me into a few styles. While the Oschon’s Gauntlets are a little heavy for the cloak, they aren’t as bulky as the other main options, which all use the Foestriker’s Mitts model, so I stuck with those (and they happily work well with the un-glamoured Star Velvet Tabard for my Machinist, as I talked about on Monday).

Using the gauntlets provided another benefit, in that they provided enough black to make the Choral Chapeau seem less out of place. My other glamour with the Cloak felt wrong with it, and it was mainly due to the use of the Aoidos’ Gloves, I think, since they’re white on the one arm. Since head pieces can be toggled, I didn’t have to worry about it messing up my Machinist look, and since it’s still my favorite hat in the game, I was quite happy to run with it.

Normally, I don’t like how the Markswoman’s Quartertights dye: they have a nice sheen to them in the default shade, and dye eliminates that, making them kind of drab. However, in this case, they fit in really well alongside the black cloth parts of the Cloak when dyed Jet Black, and they’re also a much more fitting piece to use than the Miqo’te Loincloth that I used last time.

For reasons that aren’t quite clear to me, I also kept the Bogatyr’s Thighboots from the Machinist glamour before this one. I don’t entirely get it, since I used the Oschon’s Sollerets with the Cloak before. Something about them didn’t seem right this time, though, despite my also using the Gauntlets from the same set.

So this completes the tale of how I set out to make one glamour (this one) and ended up with another as part of the same deal. I think that’s the first time I’ve ever had that happen in a way that was actually satisfying. I don’t know what’s to come on Friday. I’ve got a few things on my list: a new tank glamour (to go along with the 270 PLD Anima), an updated PvP glamour for Ninja, or a black-and-white glamour for casters. Knowing how things usually go, I’ll probably end up with a glamour for Fisher or something instead, though. >.>

See you guys then!