Lately I’ve been dabbling in Bard again for my occasional Frontlines Roulette, just for a change of pace. This works well for me, since I don’t play Bard often in PvE at all—I can leave my PvP actions on my hotbars and not inadvertently try to Overwhelm a boss in PvE the next time I run a dungeon. While I don’t enjoy Bard in Frontlines as much as I do in the Feast, I’ve been running it enough that I figured it was worth putting together a PvP-focused gearset again, which means a separate Ranged DPS glamour, too. 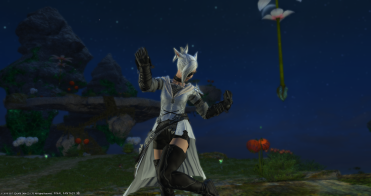 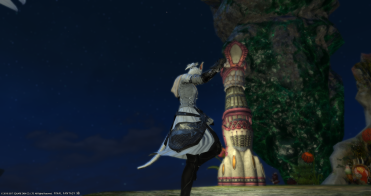 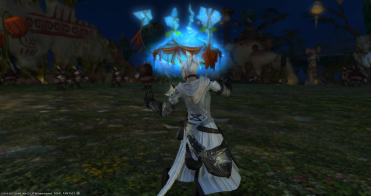 When I worked out my last glamour for Bard, I considered using the Tabard but ultimately decided against it because of the grey on the sides. Mentally, I guess I was stuck on using the Oschon’s Gauntlets, which just didn’t key off of the body very well. This glamour started mostly as a temporary thing: I’m using the Yafaemi Tabard of Aiming for its stat array, but don’t care for it on Alahra (though it’s honestly a gorgeous piece for a different style). Since I had tried using the Direwolf one recently and knew it would at least mostly match the rest of the pieces I had in place thanks to the black leather straps, I glamoured it before going into a match so I didn’t look too awful.

I’ve always generally liked the shape of the Tabard, though (in all its forms), and so once I had taken the step of glamouring it, I got the itch to actually make it work. Right away I was really glad again for the addition of the Makai Quartertights, as they work so much better than the Lady’s Knickers for looks like this, and of course I didn’t have any good reason to deviate from the standard Bogatyr’s boots either (I mean, they’re the best thighboots in the game, so it’s really hard to give up opportunities to use them). The Blinder was mostly just because I wanted something there but didn’t want to commit to glasses.

What sealed the deal for me was moving to the Allagan Gauntlets on the gloves. Still my favorite model without question, I’ve struggled to find uses for the Aiming version because of the grey above the elbow—a trait that becomes an asset in this case, since it matches the Pure White’s secondary grey well enough that the Tabard doesn’t look so awkward to me with it. In some ways I wish I had thought to use them before going back to the Aoidos’ stuff for my PvE glamour, but for now I’m satisfied to just have an opportunity to use them again.

I’m not sure where next week will take me. I’m thinking a lot on the new Diadem and how it fits into the game’s overall endgame structure, and I may end up writing on Diadem itself or the broader endgame at some point. Those thoughts are still forming, though, and it’s something I’ve been thinking of a lot since Diadem was first introduced over a year ago, so it may take awhile to have everything in order to justify a post. On the glamour front, I’ve got one to finish up on Ninja (for PvP again) that I just haven’t taken the time to work on, and I suppose I still need to post my updated crafting glamour at some point or another. It’s a little boring to me though, and I never seem to craft enough anymore to keep my thoughts focused on it.

In any case, I hope everyone enjoys the weekend, and if you’re aiming for one of those wild new i280 weapons from the Diadem, may fortune fly in your favor (because gods know we’re gonna need all the luck we can get to get one).