With most of my glamours in relatively finalized states, I again found myself without a specific topic in mind going into this morning. There are things I could work on (like my healer glamour or my crafting one), but for lack of any ideas about how to proceed on them, I can’t exactly force the matter just to have a blog post ready. One thing I did have at least vague notions for, though, was the Striking glamour I wanted to have ready for Samurai come 4.0. I talked a bit before about some of the ideas I’ve had, but I hadn’t actually sat down to really put those ideas to use. Options, of course, are limited, since I want my initial glamour to work at level 50, but I think I’ve got a tentative look, barring any new stuff we get between now and Stormblood’s launch. 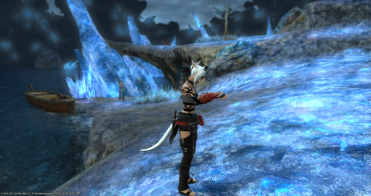 From the get-go I knew I wanted something very light that allowed for a lot of mobility. I’ve never been much of a fan of the heavy-armored Samurai aesthetic (which is generally what FFXI used). Naturally, this has a lot to do with Alahra being a rogue-ish type and her looking awful in heavier stuff generally. I was an obsessive fan of the first two seasons of Rurouni Kenshin many years ago, though, and that also shaped a lot of what I think is “cool” about Samurai.

The Arachne Shirt wasn’t my first choice, though. I started out wanting to use the Saurian Shirt of Striking, but I couldn’t find piece that looked right with it. My instinct was to do something along the lines of an old Ninja favorite, but the Picaroon’s Trousers of Striking were way too loud, and the dyeable Ramie Trousers aren’t available until level 54. Since I knew I wanted to use the Kirimu Sandals, the Warwolf Kecks were the next best thing. They didn’t look right with the Saurian Shirt, though, so I had to go elsewhere.

Since I knew I wanted at least a bit of red (to allow the use of the Hachigane), the Arachne shirt does work very well. My biggest reservation is the color, though. The shirt looks best in black, but I’d  prefer white if I think. Unfortunately, with the various bits that go Slate Grey when the top is Pure White, I couldn’t get the right sort of color balance going (since the Warwolf Kecks stay mostly black no matter what you do). I’m happy enough with the shirt in black that this has a high chance of being what I start with on Samurai, even so.

That doesn’t mean it’s the final word, of course. There are some Fuga pieces that showed up in the game files back in 3.55a. They could show up before Stormblood, and I’m sure I’ll want to use them in some way if we get them—naturally, they could work very well for a Samurai look. In any case I’ll likely be pondering other possibilities for Samurai until Stormblood launches, as I’m still rather excited for it, so I won’t be surprised if I come up with at least one more possibility.