I’ve been thinking about dabbling in Machinist lately, even if it’s pretty low on my Scripture gear priorities, after Striking gear (which will be finished this week) and Casting gear (which was half finished before I switched priorities because of Samurai hype). I’m not sure yet whether I’ll gear a tank and healer before I hit Aiming stuff or not; part of me is content to use Diadem gear for those since I don’t consider Paladin or Scholar main roles anymore. In any case, the point is that I feel like shooting stuff, or at least getting more comfortable on Machinist.

As usual when I get that itch, that means coming up with a new glamour as a way to jumpstart the process. While the one I had prior was functional, I wanted something with a bit more flare to it. The strange thing, though, is that there’s not anything in particular that’s inspiring me at this point for either Bard or Machinist. I’ve not gotten any new pieces for them in ages, and even if I’m sure I could come up with something for the Scion Adventurer’s Jacket, I don’t want to go crazy and use it on everything (even though that’s honestly mighty tempting).

So, for now, I’ve gone back to a staple, with an update that I think serves the look very well in the long run. 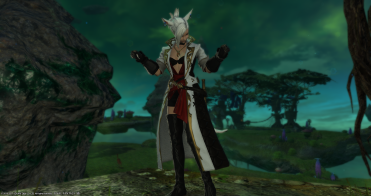 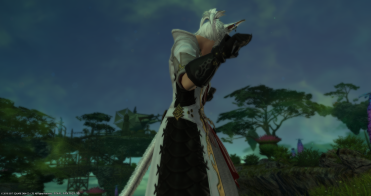 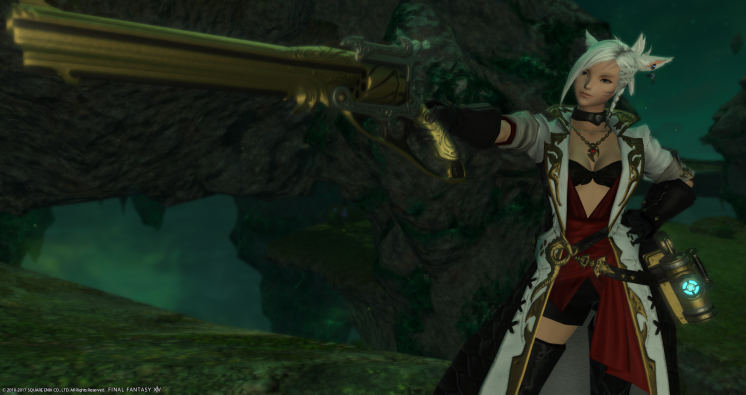 We’ve been here before, of course. “The Coat” is one of the most popular pieces we’ve got access to, and it’s not exactly uncommon here on Fashion Ninjutsu either. I’ve used it for Ninja (a couple times, even), for healers, and of course for Ranged DPS (and these are just a few examples). This is a variation on my original glamour for the Kirimu version, which I always thought looked best with the Bogatyr’s gloves and boots. As most of the links above will show, I nearly always use the Light Steel Subligar alongside the coat, regardless of model.

That choice has always always bugged me a little—while I like the look, the Subligar isn’t necessarily the most practical choice. While there were certainly other options, I’d been hard-pressed to find something I liked better overall. The Garo gear came to the rescue again—with the Quartertights being dyeable, they can substitute in for the Subligar in a way that the Lady’s Knickers can’t (especially since the black Knickers don’t match either of Soot or Jet Black dye). The combination of the coat and the Quartertights works a lot better for me, and—for the classes that have access to the model—will probably be the foundation of any further uses of the coat.

Of course, since we’ve been here so many times before, there’s not a great deal more to say. While I could have used the Scion Healer’s Highboots (which are tailor-made for every version of the coat, really, since all versions of it have some red), I’m always glad to have an excuse to use the Bogatyr’s boots (and I couldn’t find a good pair of gloves to pair with the boots for Aiming stuff anyway). The question at this point, I suppose, is if this look will be enough to get me playing Machinist again—I guess we’ll see what happens this week.