I’ve been taking something of a break from XIV lately to play Nier: Automata (which is fantastic) but the game is still taking up a lot of space in my head when it comes to glamours. One thing that’s been bothering me is my first attempt at a Samurai glamour. There’s something off about the look and it just wasn’t sitting with me, so I knew I needed to go back and make some modifications to it. The biggest thing was that it just felt too light. I wanted something with at least a little more coverage, but at the same time, didn’t want to go full on heavy armor. 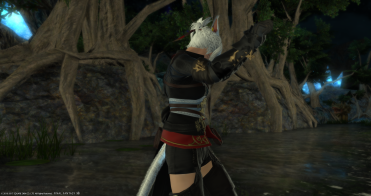 I was hesitant to use the Saurian Shirt at first, though it was definitely the first thing I thought of to replace the Arachne Shirt of Striking from the last attempt at this. I was sure that I wanted to retain the Warwolf Kecks, and the Saurian Shirt felt a little off the first time I paired it with them. So, I spent awhile fiddling around with other tops again. I thought pretty hard about using the Picaroon’s Jacket of Striking, since it has the general color scheme I was looking for, that is, there’s red on it. Since the “turtle-box” Samurai armor from Final Fantasy Tactics is red and Auron from FFX wears red, I suppose I’ve always associated the color with Samurai. Throw in the fact that the Amatsu gear prominently features red, and the color’s just stuck in my head. But I’ve never been that big of a fan of the Picaroon’s Jacket (or its Dhalmelskin cousins) because of the big spiky shoulderpad.

But I still didn’t want to use the Saurian Shirt. As it turns out, I honestly prefer the Direwolf Shirt of Striking with the Kecks, but that purple wasn’t going to fly for sure since, at least for the time being, I really want those red elements. I considered the High Allagan Cuirass of Striking, but it does that awkward flare out on the hips because of the wide stance that female miqo’te have (which really tarnishes an otherwise very nice body piece), so I wasn’t convinced I could make it work to my satisfaction. The other Allagan Cuirass is too heavy for the current look (though I can definitely see it fitting Samurai with other pieces).

So in the end I came around on the Saurian Shirt anyway. I find myself excited to use a number of body pieces in the 51-60 level range, but for now, I think the Saurian one is going to be the best fit while I’m limited to level 50 pieces until I get some other harebrained idea. The only other change from the last look was to sub in the Allagan Gauntlets for the Amatsu Tekko, since the former look better given the shirt’s baggy sleeves.

With that little side project out of the way (for now at least), I need to get my daily Expert in (I’ve been slacking on Scripture because of Nier!), so I’ll be back on Monday with…something! A glamour of some kind, probably, since I’m still pondering what the next Heavensward Retrospective will be. Until then!