I’ve been having a really hard time settling on a starter glamour for Samurai. No matter how I try, I seem to have some sort of mental hangup on the Arachne Shirt of Striking for Alahra as a Samurai. The trouble is that I can’t seem to make it work—at least not without some additional level 60 options to round out the look. At some point last week, I had a flash of inspiration based on suddenly remembering these two older looks and thought I should try the Arachne in Pure White. Last time I tried it, I went with Jet Black, which didn’t sit well for me on Alahra, especially since almost everything else she has is white at the moment.

The look itself wasn’t too hard to put together… 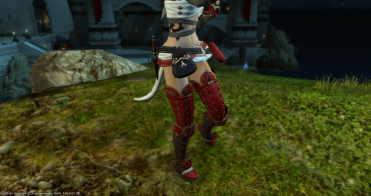 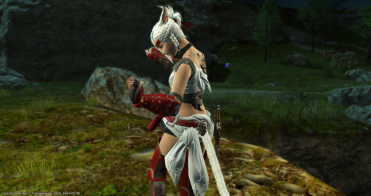 …since I’ve been using the Arachne Shirt this way for a very long time, for both Monk and Ninja. But thanks to the normal problems with Pure White dye, it’s not really workable alongside the Amatsu stuff. The grey really looks out of place, and it stands out enough that by itself that I couldn’t just ignore it. I’m not completely unhappy with the look, so I’m posting it today as sort of a failed experiment.

But this isn’t the glamour I’m using for Samurai now. I went back to the drawing board and approached things from a different perspective, and I think I got something I like better, so in a rare move, I’m doing two posts today (which is part of the reason this one is so short). You can check out the Samurai glamour I hope I’ve settled on here.