Long time readers know I almost never post Dragoon glamours—as of writing for this post, there have only been five on the site (which you can see by checking out the Dragoon category). One of those posts has curiously been one of the most popular pages on the site—probably because there are so few hits for Dragoon here—which I’ve always found amusing. There are two main reasons I don’t put together much for Dragoon glamours: 1) I don’t enjoy the class at all (it’s probably the only class I haven’t played at all since getting it to 60 in Heavensward); and 2) Dragoon has a lot of the same issues tanks do when it comes to glamour, in that miqo’te females really don’t look great in a lot of the game’s armor (and almost none of it fits Alahra, specifically).

It was the armor problem that had me unhappy with my last Dragoon glamour, but despite wracking my brain for the past couple of months trying to figure out something new, I kept coming up short. I definitely wanted to do at least one more before the close of Heavensward, though, since as much as possible I want every job to begin leveling to 70 in style (though Dragoon will almost certainly be the last one I level, just as it was in Heavensward). 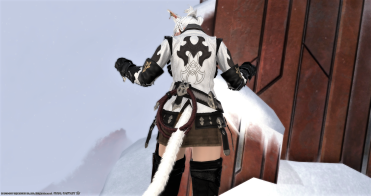 I’ve had this basic idea in mind for quite some time, actually. I’ve done a similar look for Monk, and I knew it would work well enough as a standby glamour for Dragoon until Stormblood. I resisted it for awhile, though—I’ve not really used much from Heavensward proper for Dragoon, so I really wanted to go with something new. I never found anything that really stood out to me, so here we are.

Dragoon does have its own version of the Jackcoat from 2.x, the Hussar’s Jackcoat, but since it’s black, I decided to use the dyeable crafting version instead. The Gauntlets and Thighboots are more or less my Dragoon standard at this point—I’m still quite fond of the black and white on the gauntlets in particular. It’s a shame the matching Allagan Sollerets don’t have the same style (which is really strange since they’re from the same set).

I suppose I’m fixated on the Guardian Corps

And that’s really all I have to say. I’m frustrated with Dragoon gear a bit, like I am with tank gear, in that I’m still mostly revisiting things from A Realm Reborn. I talked about that a bit in the last tank glamour spotlight, and while I could probably say a bit more on it, I’m going to save that for now, as it will be more pertinent for one of my upcoming Retrospectives (which, Hydaelyn willing, will go up on Monday).