As most everyone no doubt knows by now, the North American Data Center for FFXIV is back up and running. It was a long couple of days for many of us, I’m sure, though I have a feeling Alahra spent most of it lounging about:

I spent the first day side tracked, mostly (I had intended to get into my console games backlog a bit), converting my CD collection into FLAC files (which is still an ongoing process, and I’m kicking myself for starting it in some ways). The second day, though, I had something more engaging to keep me busy in between CDs.

Alongside FFXI’s 15th Anniversary, Square Enix is running the Return Home to Vana’diel Campaign, and given the timing, I decided I should definitely hop back over for at least a little while. So, while the Eorzean Alahra was in the second day of her coma, the original Alahra from Vana’diel woke up, and I have to say I actually ended up having a lot more fun than I thought I would.

When I got on, I was mostly intending to revel in some nostalgia—I started playing FFXI right as I was beginning college, and so it will always hold a special place in my heart—since I didn’t want to get too invested with FFXIV’s servers coming back up soon. I decided I would just work on just a little progress on my Ninja’s Job Points, which would mean laid back monster killing…but FFXI always has a way of grabbing me again.

Before I knew it, I was distracted, wondering what new Trust NPCs (which allow you to create an AI party of alter egos of many of the game’s popular characters) I had access to, and realizing one of my favorites, the Mithra Ark Angel, was within my grasp. But that meant I had to do a lot of legwork, since there were various prerequisites I needed to fill to unlock the quest to get her. That took me to San d’Oria…

…where I spent awhile reflecting on how much I missed the game’s locations. Even with various fast travel options now available in the game that weren’t available originally, you still end up running a lot—even when you can warp between home points and geofounts and use Grounds Tomes to get to tons of formerly out of the way locations quickly, you might have 3 or 4 home points in a city zone (compared to the 10 to 12 mini-aetherytes we get per city zone in FFXIV!), so you have a lot more time to take in the sights.

As part of my Trust legwork, I ended up visiting a number of older NPCs, including Shantotto… …but after that, the detour to unlocking the Mithra Ark Angel as a Trust NPC meant I needed to finish up some of the game’s storylines that I hadn’t quite gotten around to. That took me first to Ru’Aun Gardens (more commonly known as “Sky”), navigating a complicated landscape of floating islands, all without the conveniences of flight we had for FFXIV’s Sea of Clouds. 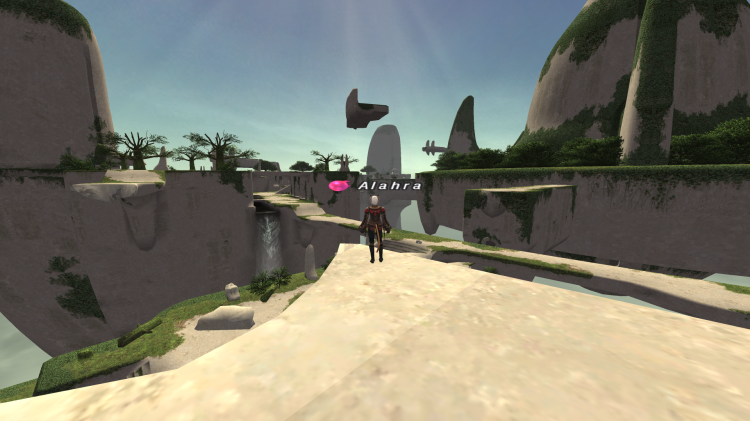 I had to reach the Celestial Nexus for a storyline battle, but the thing about FFXI is that more or less all of its early content was designed for groups—playing solo wasn’t something the game really supported early on, so especially in end-game areas, things like switches and locked doors that you needed multiple people to activate were common. Sky was no exception, so after working my way through Ve’Lugannon Palace to get to the center of Ru’Aun…

I came to a locked door that can only be opened by activating one of the yellow monoliths that are scattered all throughout Sky.

That’s a problem, since activating a yellow monolith shuts off the companion blue monoliths, locking other doors that I would need open to where I was going—the setup requires that you have someone else tag the monoliths for you while you work your way through, and thankfully, I had an old friend on hand who was basking in nostalgia the same as me (shoutout to @erinthios on Twitter for going out of his way to get the monolith for me!).

Once the door was open, I hastily rushed through corridors to avoid any doors that I needed to progress getting shut on me and eventually found myself in the heart of the Shrine of Ru’Avitau at the Celestial Nexus, someplace I had never been before.

The battle that followed was naturally anti-climactic. Though originally designed for a party of level 75 characters, FFXI’s story content doesn’t normally apply level syncs the way FFXIV’s does, so I went in with a full party of level 99 Trusts and moderate gear. But  after that, I got to finally say I had finished Rise of the Zilart, the game’s first expansion, and it was still pretty satisfying.

After that, I needed to do more legwork, since I need two Trust NPCs from the game’s second expansion in order to unlock the quest to get the Ark Angel Trusts. FFXI’s core storyline more or less is all tied up following the ending to Chains of Promathia with a questline that brings everything together. I had already finished CoP-proper, but I had inadvertently started this quest line long ago, which locked me out of the cutscenes needed to unlock those Trusts. I didn’t mind so much, though, because once I was back in the swing of things, I got to revist some of my favorite areas and characters. Coming back to Misareaux Coast was a real treat, and after that it was off to Riverne, another of the game’s mysterious areas full of floating islands. After warping around for a little while and getting my bearings (and stopping to admire the sights, of course), I was ready for another storyline battlefield, this one against the Wyrmking Bahamut. 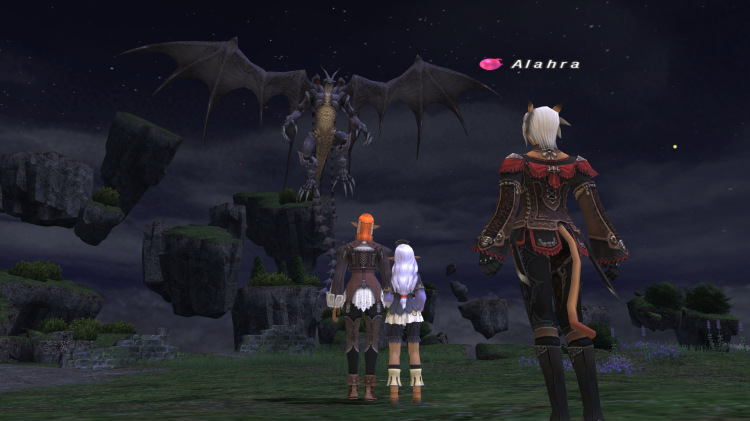 Like the final battle of Rise of the Zilart, this one was mostly anticlimactic (but at least there wasn’t a Calamity) since I’m far beyond the intended power level for the battle. But finishing up the battle meant I could finally unlock one of the two ladies from that screenshot with Bahamut, Ulmia:

After that, I checked to see if I could nab the other, the first version of Prishe (she has another version I already have from a special event), but it looks like I’m going to have to do the next few quests as well, and it was getting pretty late. So I decided instead to finish off the night using some of the new Trusts I’d picked up and do a little Job Point work. 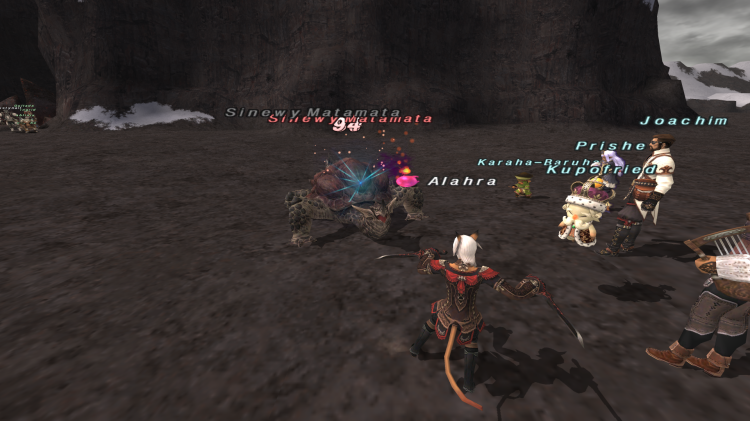 Since the welcome back campaign lasts for a couple weeks, I think I’m going to be revisiting FFXI at least a little more, but since the FFXIV servers were back up this morning, I also needed to test out my connection with the new Data Center.

I ran a few tests on the Stone, Sky, Sea dummies (which is an area I normally have some lag in), and overall I think my connection is about the same. I noticed some slight improvements, but it’s hard to judge these things from a quick session of tests like that. If things were really bad for me I’d expect them to be readily apparent, so I’m pretty happy for now.

I’ve been hearing that others have had more trouble, though—hopefully that’s something that shakes out over the next few days, as I’m sure everyone wants to go into Stormblood smoothly. I’ve really got to get back to the game, though—with Tuesday gone, I have one fewer day with which to cap Scripture, and 900 is a lot!

Thanks for indulging my nostalgia trip (and if there are more of them over the next couple weeks, I hope you’ll indulge me again)!