Even with all the hype from the latest Live Letter, since things have slowed down a lot on the glamour front with the end of the expansion, I honestly really miss working on glamours. I’m sure I’ll get my fill on that once Stormblood is here (especially since I kind of obsessively collected dungeon gear in Heavensward, I imagine I’ll do the same for 4.0), but that’s still a few weeks away and I really have the itch. Just for something to do, I’ve been fiddling with potential Red Mage glamours again, and I’m also thinking about Samurai (though I don’t have anything new there yet).

Pondering Samurai actually reminded me of an early Heavensward tank glamour that I was surprised I never posted here. While considering things I hadn’t tried, I thought that the Wild Rose Cuirass might work, but couldn’t find much to pair it with. Ages ago here on the site, I talked about my frustrations with the Wild Rose set, but I actually did at one point use the body piece for a while. It’s got a very nice lightly armored look and looks great on miqo’te, so I actually used it while leveling all three tanks for awhile. 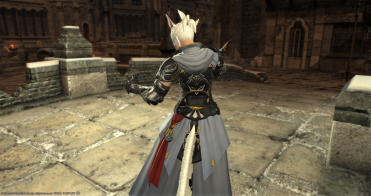 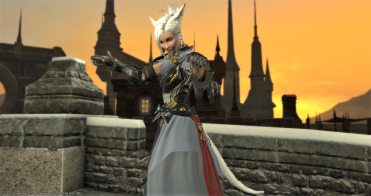 The Wild Rose Cuirass is incredibly difficult to work with since it’s non-dyeable. Basically none of its colors have a matching dye (though you can get pretty close to the blue of the cloak). I’m amazed I put together a glamour I liked with it at all, honestly—there’s something about the sum of all the parts that works here, though. It feels like the kind of accidental looks we’d get back before glamour was added to the game, where pieces you happened to have for your item level created something that actually looked nice.

I’ve never quite understood why the Guardian Corps Skirt and Cuirass work together in my mind—they’re completely different in style and fabric and of course the colors don’t line up at all. But the Skirt is probably one of the best neutral options we have, and I think it works really well for tanks (and I suppose since I’m using it on Lynahra right now too, it’s been on my mind lately). It’s also the only skirt that seems to look right alongside the Orthodox Greaves.

The Orthodox pieces are, of course, my staple choice for tanks on Alahra. Like the Guardian Corps Skirt, they’re sort of neutral, and they can work alongside plenty of other pieces. In the case of the Cuirass here, they do key off the small bits of silver on the body, but that’s a pretty minor part of why they’re in use here. Not a lot of tank gear really jives with the Cuirass, and since the Orthodox stuff doesn’t clash (and most other stuff seems to), they’re the best choice I’ve been able to find.

Really, I think it’s the Orthodox pieces that really make the look work—even using the same body and leg pieces, I couldn’t find any Striking pieces that I felt worked for Samurai, so that’s why I’ve posted the tank glamour here instead of a new Samurai one. I’m still going to be playing around with things for Samurai (and honestly, probably Red Mage) for a bit yet, but the Wild Rose Cuirass is definitely best for tanks.