I’ve mentioned a few times over the last several months that I’ve been working on a more permanent glamour for all of my crafting classes, since they’ve long since been fully kitted with i190 Ironworks gear. I had a red and black look I was using for awhile, but what I really wanted to do was figure out something in white, since every other glamour I’ve got presently has white as a primary (or at least prominent) color. I’d managed to do that quite successfully for my gatherers, using the Carbonweave versions of the Ironworks gear, but the same trick didn’t work for Disciples of the Hand, since their Carbonweave gear doesn’t dye quite so nicely.

As we’re coming up on the end of Heavensward, I realized the other day that there was one thing I had always planned to do back in 3.0—I wanted to get the dyeable versions of the level 60 “artifact” armor for Alchemist. Back then it was kind of a pain in the neck, especially since I didn’t have any level 60 gatherers, and so I never got around to it. I used the non-dyeable versions of the set for stats and mostly forgot about the idea once the Ironworks gear was added.

Now, though, the pieces are much easier to make, so I thought I’d see if I could put together a look using the set to at least hold me over until we get some new crafting gear in the expansion. 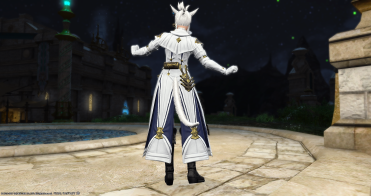 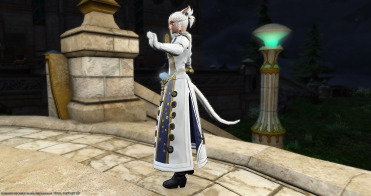 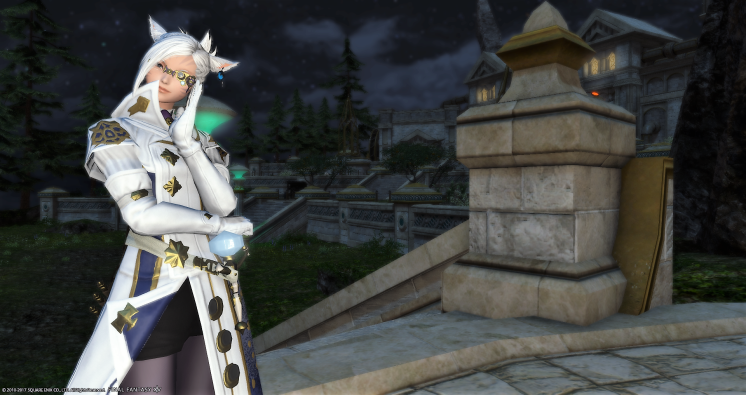 It’s pretty rare that I use so many elements from a single set at once, but I had a lot of trouble finding elements that paired with the Overcoat better than the companion pieces to the set. So, most of the work I had to do on this one was deciding on dye colors. Under normal circumstances, I might have gone with different colors for the skirt and the boots, but since I was glamouring these job-specific pieces over the Ironworks gear all of my other crafters are also using, I went with black so things wouldn’t look too weird on those other classes.

I’ve wanted to do this basic look ever since I noticed that the Alchemist’s Trousers are a similar blue to that on the Overcoat, and I think I actually did for awhile. The Overcoat isn’t nearly as nice in its off-white base color scheme, though, so to be really happy with it I needed the dyeable version. I’m really satisfied with the look overall even if it isn’t particularly novel, since it uses so much of the level Cauldronmaster’s set.

I do wish crafter gear wasn’t generally shared across so many classes. It’s one thing to have a single look cover a few similar classes (like all three tanks say), but it’s quite another to have one look apply to eight whole classes that are only loosely associated with one another. Because of that, it’s quite possible I won’t keep this look for too long, and since most of my prep for Stormblood is taken care of now, I might have time to kill between now and the beginning of Early Access anyway.