I really should have known that the Alchemist glamour I put together earlier in the week wasn’t going to last. Wednesday evening, after the post went up, I resolved to finish up my Dark Knight Anima weapon, and along the way, I got a really strong urge to mess with my tank glamour. That meant crafting some of the Sky Rat’s pieces that I wanted to try out, and in the process of doing that, I realized I plain couldn’t stand the way my other crafters looked in the Ironworks default gear (which was somewhat haphazardly dyed thanks to inheriting the dyes from my Alchemist glamour).

The tank glamour I put together ended up not really sticking—I think it’ll look better on Lynahra once I get her Warrior to 60 (which is looking like it won’t happen before Stormblood), but I did want to have a glamour post for today, since once the leveling process begins in the expansion, I’m not sure how often I’ll be glamouring at the start of things. So, I decided to give my pre-4.0 crafter glamour one more shot, which ended up being pretty tough (though that was expected, since I’ve been having trouble there for awhile).

I decided I wanted something basic and functional, and I originally decided on using the Survival Shirt, which I’ve always wanted to use but never managed to. That ended up being a dead end, though along the way I decided I also wanted to use the Field Commander’s Boots simply because I liked them. I basically worked from the feet up until I had a full glamour. 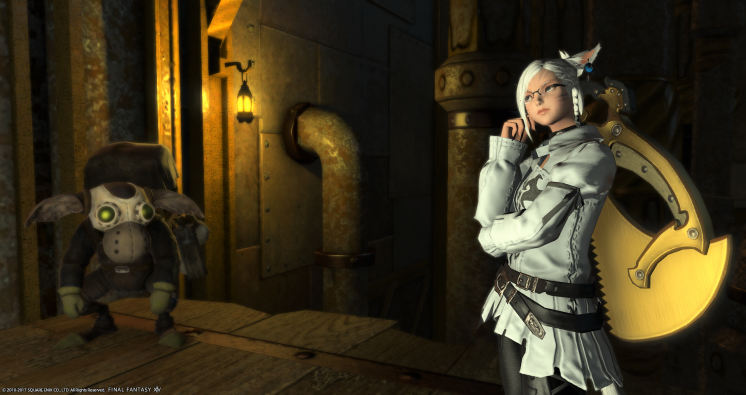 As anyone who’s spent more than 5 minutes on this site knows, I generally don’t like to glamour pants in FFXIV, though that’s actually not entirely because of a preference for skirts and such. While I do have that preference, I’m actually generally just not a fan of the way most pants look in the game. The common style is either sort of baggy in unflattering ways or clamps at the ankle in a strange fashion.

That really limited what I could do with the Field Commander’s Boots, especially for crafters, who have even fewer gear options than battle classes do. I experimented with the Leonhart Bottoms (since they have some brown leather that matches the brown leather on the Boots), but I really didn’t like their fit. Other than those, the only pair of pants I could find that looked decent were the Falconer’s pants, which I’ve used only once or twice before.

Since the Survival Shirt wasn’t working for me (the big problem was finding gloves to go with it), I went for the Falconer’s Shirt instead, which fit the “functional” bill fairly well. I still had trouble finding gloves for it, but I thought the Claws of the Beast looked better alongside it than they did with the Survival one.

The glasses are, of course, standard issue. I would have liked to have some kind of hat, honestly, but all of the best crafter hats are job-specific, so they were out of the question.

With that out of the way: we’re one week from Early Access! I have not decided yet whether I’m actually going to post next Friday or not—I kind of want to just indulge in the game for that day. I do plan to still post on Monday and Wednesday as normal, though, with one of those being my final thoughts on Heavensward as a whole, closing out the series of Retrospectives for the expansion.

I hope everyone’s excited for the expansion. I know the closer we get, the more ready I am, and I am getting more and more keen to finally try out Samurai after all this time. I’m also very excited to have a ton of new gear to work with. I’ve missed having endless combinations to work with. I hit upon so many staples through Heavensward that I love, but it’s definitely time for some changes in the glamour department!