Today marks the soft ending of the Heavensward era for FFXIV. While the next expansion doesn’t officially launch until next Tuesday, on the 20th, maintenance tomorrow will usher in Patch 4.0 in preparation for the beginning of the Early Access weekend, so for the portion of the population who pre-ordered Stormblood, 3.x is at its end. And as is natural, I suppose, at the end of things, I found myself thinking back to the very beginning of Heavensward. Of course, I’ve been collecting my thoughts on the expansion for awhile now, but I haven’t touched much on the excitement of that very first day of Heavensward‘s early access.

3.0 brought something I had been wanting forever, the addition of Replica versions of the A Realm Reborn Relic/Zodiac weapons, and the very first thing I did was go to North Shroud to pick up my Replica Yoshimitsu Nexus. The second thing I did was acquire a Rainbow Shirt of Scouting, which I glamoured almost immediately. I had been waiting for more Far Eastern gear for a long time, and as soon as I found out about this otherwise plain set, I rushed to Ishgard, where I had been told we could buy them at a battle gear vendor.

Of course, I was in a real hurry to get started on the new expansion content, so I didn’t actually stop to build an outfit around the new top. I’d been using the glamour in my final shot from A Realm Reborn, which I showcased in the very first Looking Back spotlight on the site. A owe a special shout out to my my dear friend Esper Eidolon of Diabolos, who I don’t see near as much as I would like now that I’ve since moved on to Balmung, who wanted to get all of her friends together on the last night of A Realm Reborn. Without her, I wouldn’t remember which specific glamour I went into Heavensward with! 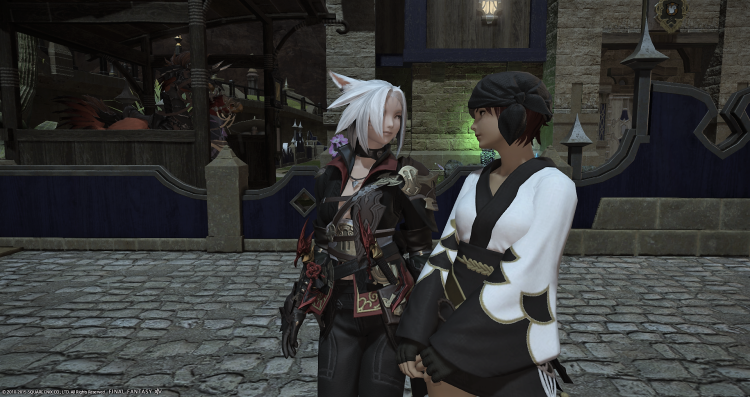 But the rest of that glamour worked well enough with the Rainbow Shirt that I got started right away. The resulting glamour actually features in my very first screenshot of Heavensward, in the wastelands of Western Coerthas. On reflection it’s actually a bit wild to me that I didn’t think to take any screenshots until I was already going full throttle on the Main Scenario—I don’t have any screenshots of the beautiful city of Ishgard until around three weeks after Early Access began! 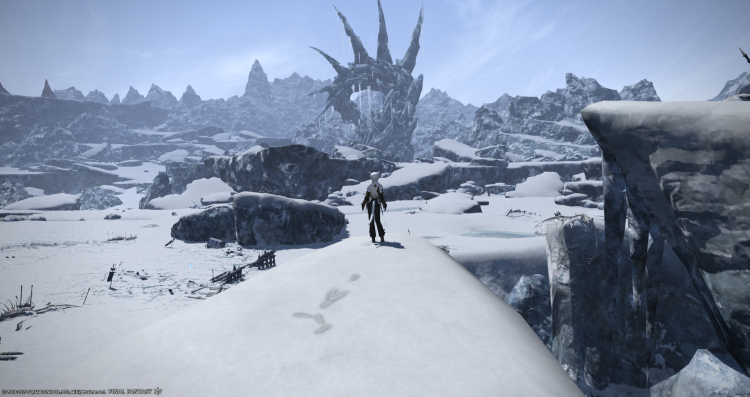 In the spirit of my nostalgia, I decided to go back to this point for this final glamour post of the Heavensward era to bring things entirely full circle. While there are a few glamours here and there from 3.x that I didn’t get around to showcasing (since they were from before the site’s creation), I’m sure that with all the new gear we’re soon to be buried in, I won’t be coming back to Heavensward-era glamours for a good long while. For full period accuracy, I even went back to Alahra’s original hair for the shoot, which looks so strange to me now. 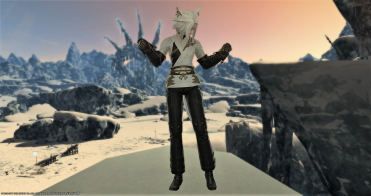 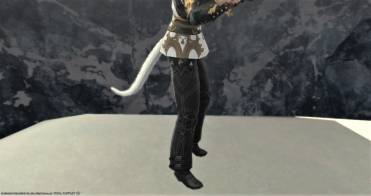 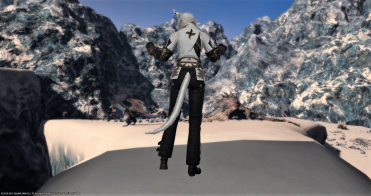 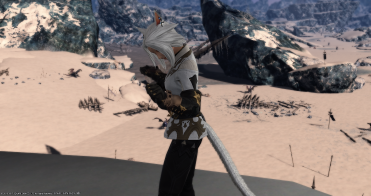 Like I said above, I didn’t put a lot of time into this one: everything else I was using was already in place, and I dyed and glamoured the shirt within a few minutes of buying one. As I progressed through my journey to level 60, I iterated on the look, subbing in various gloves (like the Demon Bracers of Scouting and Halonic Vicar’s Gloves), and also switching to the Ramie Trousers of Scouting. Outside of a few brief windows where I used some of the new dungeon gear, this core look lasted me until 59 or 60, after which it mostly faded into obscurity.

As excited as I was to use the Rainbow Shirt, whenever I’ve tried to come back to it and really devote a look to it, I’ve always been dissatisfied. Were it not for the early excitement of Heavensward, it might have been a piece that I never used, but that makes it a glamour of its time and place, and there’s something about looking back on it on the eve of Heavensward‘s closing that really appeals to me.

It also serves to highlight some of the changes in Alahra’s style—while I did occasionally use glasses before Heavensward, it wasn’t until the expansion that I started throwing them on absolutely everything almost without question. Her hair also changed, of course (for the better, if you ask me, though some friends disagree), and once Heavensward gave us the Expeditioner’s Thighboots (and later, the Scion Healer’s Highboots), it got to be pretty rare that I ever revisited these Trousers. One thing that hasn’t changed is my preference for the Yoshimitsu Nexus—none of the Ninja Anima stages ever really eclipsed it in my mind, and I’ve had it glamoured for several months now.

As I say good-bye to Heavensward, I’m excited to learn how things will change in Stormblood. Undoubtedly, some things will remain, but what new items will my glamours start to coalesce around? With hopefully more Far Eastern gear on the way, maybe I’ll finally find something that works alongside the Rainbow Shirt, or maybe I won’t, and it will stand memorialized as a memory of my very first day in Heavensward.

I will see you all on the other side of maintenance (and on Twitter, of course), ready to dive into Stormblood!