I had hoped to have Ninja to 70 by today, so that I could play around with its new Artifact Armor and hopefully work out my first level 70 glamour of Stormblood, but I didn’t quite make it. I’ll have 70 this week for sure, and there’s a decent chance I can get there by Wednesday. That’s left me with a bit of a conundrum: I only have one other new glamour since starting the expansion (which I suppose is understandable, since most of my time has been spent leveling stuff!), and I didn’t want to post that one quite yet. However, I also don’t want to not have a post today, so here we are. 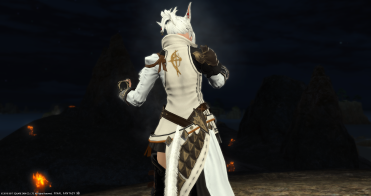 This is, of course, a glamour that was utterly inevitable. I didn’t want to post it quite yet (maybe saving it for a Looking Back post sometime) both because of that and because this marks the third Glamour Spotlight in a row that uses this same general look. I can’t help how much I love the tunic model, though, so I couldn’t not do something with it when I hit 64 on Samurai. (That may not be the case when I get Bard to 64 though, as I don’t care as much for the way their new version of the tunic dyes).

The only tricky part here was gloves. I’ve gotten really fond of the Sky Rat Hook for the Ninja variant of the look, but with the Striking version of the Kudzu Tunic having brown accents rather than red ones, I couldn’t use the Sky Rat Fingerless Gloves without dyeing them. Unfortunately, they don’t dye in a very friendly way to the rest of the look, so I needed to find something new. The Replica Allagan Gauntlets I used in the previous Striking glamour I had with the Orthodox Tunic were out, too: I’ve come to prefer shorter gloves with the top, and they also weren’t the best match color wise with everything else.

At first, I was using the Gyuki Leather Halfgloves of Striking, but I didn’t like the grey elements on them, so I went looking for something else. The Griffin Leather Bracers I’d previously used with the Dravanian Tunic were out: the red on them doesn’t work here (and I really wish I could use them on Ninja instead, for their Kudzu Tunic). I tried the new Tekko #55 as well, but they had a bit too much metal on them and seemed a bit off with the shirt. The Bloodhempen Bracers that I ended up using aren’t ideal: they cut off the sleeve on the left wrist in a way I’m not especially fond of, but that’s not very visible in general play, so they’ll serve their purpose until I can find something better (hopefully with higher level gear on the way to 70).

That’s it for now. I’ll be working on Samurai further while waiting for the other half to get home so we can head toward 70. I’ve got my eye on a couple of dungeon pieces for it, but I need to get them first! Hopefully, even if I don’t have Ninja to 70 by Wednesday, I’ll have been able to work out something new for Samurai as a backup plan!